Why Is The United States Importing Natural Gas From Russia? 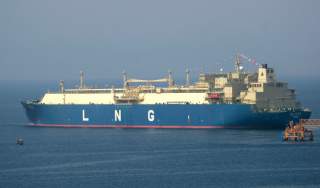 In the coming days a Spanish-flagged ship, the Catalunya Spirit, will deliver a shipment of Russia-originated liquefied natural gas (LNG) to Puerto Rico. Bizarrely, the United States—a leading exporter of LNG—is nonetheless importing it from a geopolitical rival. And this isn’t a first. Last year a supply of Russian LNG arrived in Boston amidst a spike in demand to fight off the winter cold.

Basically, the Jones Act. This 1920 law mandates that vessels transporting cargo within the United States must be U.S.-registered, at least 75 percent U.S.-owned, at least 75 percent U.S.-crewed, and U.S.-built. But no ships capable of transporting LNG in bulk quantities that meet these requirements exist. Of the world's more than 525 LNG carriers, not a single one is Jones Act-compliant. And so even as ships laden with U.S. LNG voyage to countries as distant as India and Japan, it cannot be sent by water to other parts of the United States.

This is almost certain to remain the case so long as no changes are made to the Jones Act. The law’s strictures virtually guarantee that transporting U.S. LNG to Puerto Rico, or via ship to any other part of the United States, will never make economic sense.

The cost of ship construction alone is prohibitive. According to the Wall Street Journal, a U.S.-built LNG carrier would cost over half a billion dollars more than one purchased from a South Korean shipyard ($700 million versus $180 million). Beyond the general inefficiency of U.S. commercial shipyards, this differential is explained by a lack of expertise—U.S. shipyards have not built an LNG carrier since 1980. In a 2015 GAO report one U.S. shipyard admitted that to build such a ship it would have to “hire an additional 250 to 300 skilled Korean workers for the duration of the build time to ensure the work is done correctly.”

Crewing the ship with Americans still further diminishes the attractiveness of a Jones Act-compliant LNG carrier. U.S.-flagged ships are estimated to have operating costs in excess of $6 million per year compared to ships operating under foreign flags, with U.S. crews the primary cost driver.

To make the math pencil out, a Jones Act-compliant LNG carrier would have to charge rates well above those of foreign-flagged carriers. This would cut into the savings of using cheap U.S. LNG in the first place, if not erase it entirely. And when such a ship was not delivering LNG to Puerto Rico, how would it earn its keep? For deliveries to international destinations the ship would have to compete against foreign-flag vessels with far lower costs. Any U.S.-built and U.S.-crewed LNG carrier would almost certainly be unemployable and unviable on a long-term basis.

Flying cows and the importation of Russian gas—the gross inefficiencies wrought by the Jones Act would be laughable were they not so serious.

Colin Grabow is a policy analyst at the Cato Institute’s Herbert A. Stiefel Center for Trade Policy Studies.

This article originally appeared at the Cato Institute.