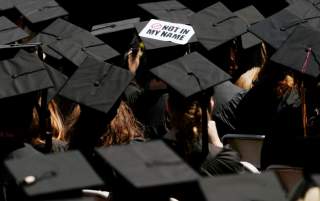 For much of the 2019-2020 academic year, Syracuse University has been besieged by student protests over how the school handled of a series of racist incidents on campus.

In the latest protest, Syracuse student activists have occupied the campus administration building since Feb. 17. Using the hashtag #NotAgainSU, they are calling for action in the wake of racist, anti-Semitic and bias-related incidents that allegedly occurred on campus since this past November, when they staged an earlier sit-in to protest a spate of hate speech acts on campus.

The school initially suspended 30 students involved in the latest occupation. However, Chancellor Kent Syverud lifted the suspensions two days later. The Syracuse protesters have been meeting with the administration since March 2 to negotiate a series of demands. Some of the demands have already been met since the November sit-in.

Among other things, those demands include hiring more faculty of color and more counselors, revising the curriculum, giving students with disabilities preference in housing, and disarming public safety officers. Protesters also want to establish new policies for reporting bias-related incidents at the 150-year-old institution, which is located in central New York state and serves more than 15,000 undergraduates.

Whereas some may view student protests as something to be squelched, as an education researcher and author of a book about student activists, I have come to see that campus protests, like the ones at Syracuse, serve an important educational purpose.

Through activism, students learn not only to recognize and confront what they see as an unjust state of affairs. They also come to identify the root causes of a problem and develop solutions. The question college leaders and the broader society must ask, then, is if punishing student protesters – as what initially took place at Syracuse – is the right course of action.

The school’s officials have acknowledged they are searching for answers in this regard.

“We all messed this up and I’m sorry,” said Amanda Nicholson, the assistant provost and dean of student success at Syracuse University. “What we know is our current policies on how we work with protests have failed. They don’t work. This is not a workable situation. We need to come up with something that really does work.”

I’ve found that student activists today are quite sophisticated when they seek to negotiate and develop strategies for change.

Consider an example from my new book, “The New Student Activists: The Rise of Neoactivism on Campus,” in which student activists sought to persuade campus administrators to replace what they saw as a culturally insensitive mascot. They figured that petitions, bookstore boycotts and other such actions would not get the administration to budge. So they crafted a compromise position to offer, once those other tactics would fail.

The compromise would be to require all freshman to take a course in the history and culture of the people represented by the mascot.

Privately, the student activists reasoned that as more students became educated on why it is problematic for people from a dominant culture to use an oppressed group’s identity as a mascot, support for changing the mascot would grow. Publicly, they would present the compromise to administrators as a relatively low-cost and responsible way to address the activists’ concerns.

The Syracuse protesters are pursuing similar tactics and goals. For instance, their list of demands includes creating a course on the history of protests on their campus.

Learning beyond the classroom

Research affirms the idea that through activism, students develop critical analysis skills and a deeper understanding of society and social change.

Student activists have called out their colleges for a variety of things – from relying on overseas sweatshops to produce their college apparel, to polluting the environment to doing too little to investigate and punish sexual assault and harassment on campus.

Robert Rhoads, a scholar of higher education, found that activism teaches students things they are unlikely to learn from course materials or class discussions. My own research, however, finds that activism can complement academic learning.

For instance, in my study of more than 200 student activists at 120 colleges and universities across the United States, I found that most believed their activism enhanced their academic performance.

Although some acknowledged that activist work could feel more important or pressing than a homework assignment, the students by and large credited their activism with making them more successful academically. In some cases, it enabled them to make connections to theory or to apply course material to their everyday life. In other cases, it inspired them to work harder in classes so they would be seen as intellectually credible. Only 12.5% said activism hurt their grades or academic engagement.

Sometimes, colleges don’t recognize the value of student activists until long after the fact. For instance, in February, the University of Mississippi – better known as Ole Miss – welcomed back five former students who had been expelled 50 years ago for protesting a campus environment that was hostile to minority students. The events were intended to honor the sacrifice of the activists and acknowledge the harm they suffered from law enforcement and university administrators.

I don’t think it should take half a century for a university – and society in general – to figure out that punishing students who challenge their institutions to improve is the wrong way to go. Fortunately, Syracuse Chancellor Syverud recognized that it was wrong to expel protesters when he reversed the #NotAgainSU suspensions.

The deeper challenge for all universities, in my view, is to figure out how to address the conditions that give rise to protest in the first place.