Why U.S. ‘Strategic Ambiguity’ on Taiwan Isn’t Going Away 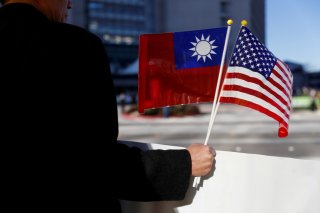 In spite of their numerous policy differences, the U.S. administrations of Joe Biden and Donald Trump see eye-to-eye on identifying the People’s Republic of China (PRC) as a serious geostrategic threat and standing up for Taiwan’s security and vibrant democracy as an essential pillar to sustain a free and open Indo-Pacific.

The Trump government, in its four years, had approved more than $15 billion in arms sales packages to the island democracy—that total surpassed the combined amount authorized by the Obama administration’s entire eight years in office.

In August 2020, Alex Azar, the then secretary of the Health and Human Services, became the highest-ranking American official to visit Taipei since Washington severed relations with Taiwan in 1979. Shortly after, Undersecretary of State for Economic Growth, Energy, and the Environment Keith Krach also came to Taiwan to attend the funeral of former president Lee Teng-hui.

On January 9, 2021, outgoing Secretary of State Mike Pompeo lifted all previously U.S.-imposed restrictions on exchanges between American and Taiwanese government officials, declaring that Washington would no longer “appease the Communist regime in Beijing.”

In response to Beijing’s persistently escalating military harassments of Taiwan, the Biden administration has followed its predecessor’s pro-Taiwan stance. On Inauguration Day, January 20, 2021, it invited Bi-khim Hsiao, Taiwan’s de facto ambassador to the United States, to attend the forty-sixth president’s swearing-in ceremony. That attendance was a first in forty years. A forceful statement was issued by the State Department, calling out China to “cease its military, diplomatic, and economic pressure against Taiwan,” adding that the U.S. commitment to Taiwan is “rock solid.”

In his first call with Chinese president Xi Jinping on February 10, 2021, President Biden raised concerns about China’s increasingly belligerent actions in the region, including toward Taiwan. Secretary of State Antony Blinken and National Security Advisor Jake Sullivan, in a similar vein, also underscored the Taiwan issue during the sharp exchanges with their Chinese counterparts at March’s Alaska meeting. Blinken, at a congressional hearing, even referred to Taiwan as a “country.”

Meanwhile, the United States continues to dispatch warships to transit through the Taiwan Strait and is entering into a coast-guard cooperative arrangement with Taiwan. On April 9, 2021, the Biden administration issued new guidelines to further liberalize contacts between American and Taiwanese officials to encourage both parties to more freely interact with each other going forward.

The aforementioned initiatives and moves all suggest that the United States may be ending its decades-long Taiwan Strait approach, known as “strategic ambiguity”—a policy that was also backed by President Biden when he was the ranking Democrat on the Senate Foreign Relations Committee.

Under strategic ambiguity, the United States aimed at deterring both parties from unilaterally upsetting cross-strait peace and stability—for example, Taipei’s declaring de jure independence or Beijing’s coercing reunification—without giving a clear-cut answer to whether Washington would really come to Taiwan’s defense if the PRC mounts an armed attack on the island.

Richard Haass and David Sacks of the Council on Foreign Relations advocated last September in Foreign Affairs that strategic ambiguity “is unlikely to deter an increasingly assertive China with growing military capabilities. The time has come for the United States to introduce a policy of strategic clarity: one that makes explicit that the United States would respond to any Chinese use of force against Taiwan.”

Many in America’s military establishment have echoed this sentiment, sounding the alarm that China is growing more militarily capable of invading Taiwan within the next six years. Yet, there are also detractors who oppose more explicit U.S. support of Taiwan, fearing that could back Xi into a corner and push Beijing into real actions.

The deliberations, nonetheless, overlook the crux of the issue—what to do about the U.S. “one-China” policy that has been an integral tenet of strategic ambiguity over the past forty-two years?

Both the Trump and Biden governments, facing the heightening of Sino-American rivalries and the growth of U.S.-centric nationalism at home, downplayed the “one-China” policy in order to satisfy national security imperatives and domestic identity politics. Still, Trump has stopped short of discarding the policy. Pompeo even equated Taiwan to a “free China,” a designation reminiscent of the Cold War era when Washington recognized the Republic of China (Taiwan’s official name) as the formal Chinese government. The Biden team, while easing the rules on U.S.-Taiwan official encounters, responded that it would be implemented based on the “one-China” policy.

Contrary to Haass and Sacks’ arguments, the notion of “One China” is fundamentally at odds with strategic clarity. Here is why.

While Washington has unequivocally stated that its “One China” policy is different from Beijing’s “One China” principle, under which the “Chinese Communist Party asserts sovereignty over Taiwan,” the American version recognizes the PRC as the sole legitimate Chinese government and “acknowledges the Chinese position that there is but one China and Taiwan is part of China.”

The United States and Taiwan would maintain an “unofficial relationship” based on the three U.S.-PRC Joint communiqués in 1972, 1979, and 1982. Washington would also not support Taiwanese independence. The Taiwan Relations Act of 1979 has enshrined the U.S. commitment to assist Taiwan in maintaining its defensive capabilities without telling whether it would intervene directly and militarily.

All cross-strait resolutions must be attained through peaceful and consensual means, particularly getting the assent from Taiwan’s democratic will.

Hence, this U.S. framework is, in itself, shrouded by great complexities and contradictions. It is meant to sustain Taiwan’s security, democracy, and autonomy without providing the latter too much latitude in challenging China’s so-called territorial integrity.

But, if Taiwanese public preferences (with 80 percent currently advocating some form of permanent separation from the PRC) ultimately push for legal independence, due to China’s unrelenting coercive pressures, and its democratically elected government obliges, would it be considered a unilateral provocation to regional stability? Would the United States come to Taiwan’s defense under such a scenario? Well, if the United States perceives Taiwan as China’s “internal matter,” then the answer could be tricky.

By suggesting that Taiwan may be a Chinese territory under the “One China” rubric, however evasively the term is defined, Washington ties its own hands and undercuts the legitimacy that it can forcefully come to the island’s rescue and repel a Chinese attack.

The debaters of strategic ambiguity have reasoned in the wrong order. Unless the United States can decisively make up its mind on doing away with the “One China” policy irrespective of Beijing’s reactions, strategic ambiguity inevitably remains. Until then, their discussions are simply running in circles.