Why the U.S. Army Loves This New Machine Gun 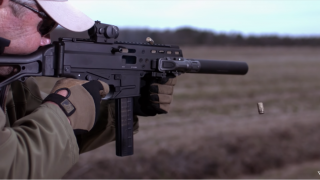 Mention U.S. Army Military Police, and most people imagine gate guards or traffic cops on base. However, military police also act as the bodyguards of high ranking officers and army functionaries. In such roles, the standard issue M4 Carbine and M9 pistols are often too bulky or heavy for the job. Specialist weapons are needed for these teams; in the vein of the MP5s, Uzis, and P90s used by the U.S. Secret Service.

The need for a new compact submachine gun (SMG) for these teams was the basis of the Army’s Sub Compact Weapon (SCW) program, which solicited prototypes from six leading companies in the firearms industry. On April 1, 2019, the B&T APC9K won the subcompact weapon contract.

But what makes the B&T APC9K better than its competition? Why was it selected instead of more modern PDWs like the H&K MP7 and FN P90?

B&T is a relative newcomer to the firearms manufacturing business. The Swiss company got its start developing suppressors for H&K firearms, first the MP5 and later SOCOM’s Mk23. That experience led to one of their first attempts at competing for a U.S. Government contract in which they submitted one of the competing designs for the Mk23’s advanced suppressor, although they did not win that contract.

Additionally, B&T started producing full firearms when they purchased the design for the compact Steyr TMP, modernizing it and renaming it the MP9. The MP9 proved relatively popular with police groups as it was compact and relatively controllable for a small 9mm SMG due to its rotating-delayed blowback action. Also, MP9s are used by Russia’s elite FSB Alpha counterterror team, India’s specialist Ghatak platoons, and Dutch fighter pilots.

B&T used the experience working on the MP9 to develop the APC9, their first “clean slate” design. While it is a straight blowback design for simplicity, it utilizes a beefy sprung hydraulic recoil buffer at the end of the receiver to minimize recoil. It features ergonomic improvement over the MP9, with a short throw safety/selector and a magazine release and bolt catch within easy reaching distance of the trigger finger.

By most accounts the APC9 is the top-tier modern submachine gun, beating out legacy designs like the MP5 as well as newcomers like the SIG MPX. The APC9’s modern AR-style controls, drop free mags and last round lock open speed up reloads compared to other similar guns.

Moreover, compared to the SIG MPX which also competed in the SCW program, the APC9 throws less gas back at the shooter while running suppressed. This is because it uses the straight blowback action, unlike the gas operation of the MPX. The MPX also has a 90 degree throw fire selector/safety compared to short 30-45 degree throw of the APC9. While the MPX’s safety mirrors that of the M4/M16 familiar to soldiers, the APC9’s short-throw selector is faster to activate.

But why return to 9mm instead of buying the MP7 or P90?