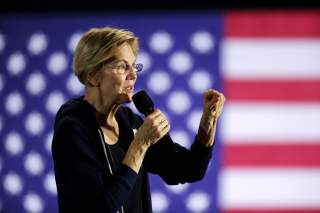 An advisor to the Warren campaign, Simon Johnson of MIT, has written an impressively fact-free Wall Street Journal article claiming Senator Warren's "remedy for health care costs" would be a wonderful gift to American businesses.

"Americans currently spend nearly 18% of gross domestic product on health care. . . and a great deal of this burden falls directly on companies." He claims "this dead weight gets heavier each year" and "companies cannot by themselves easily constrain health-insurance premiums." The impression is that businesses shoulder a large and rising share of total spending on health care. And unlike all other employee compensation (such as salaries and retirement benefits) this is said to be just a "deadweight cost" that "get heavier each year" yet remains "unpredictable."

According to the Centers for Medicare and Medicaid Services (CMS), however, "the private business share of overall health care spending remained fairly steady since 2010." That steady 20% share is neither "a great deal of" the total nor did it "get heavier each year." What has gotten heavier each year is the burden of Medicare and Medicaid which, unlike private companies, obviously cannot "constrain health care premiums" –­ including those collected in the form of taxes.

Federal, state and local governments accounted for 48% of spending in 2017, says CMS, compared with 34% for private insurance. If someone is spending too much, the private sector seems the least likely culprit. And Johnson doesn't even pretend that health spending will be any smaller "over the next 10 years."

Johnson does claim out-of-pocket health spending "would drop nearly to zero," ostensibly because Warren's plan would allegedly have no premiums, copays or deductibles (until the money ran out). But out of pocket health care spending can't possibly drop to zero because it includes over-the-counter medicines and supplements, and many other goods and services not normally covered by Medicare (except private Advantage plans) such as hearing aids and eyeglasses, dental care, massages, etc.

"The health-care burden hurts American business," says Johnson, due to "the onerous contribution most companies are required to make through employer-sponsored insurance." Would the Warren plan end that "onerous contribution"? Of course not. They're counting on it to pay 43% of the cost of the plan.

Washington Post fact-checker Glenn Kessler explains: "Instead of employers continuing to give that money to insurance companies, Warren proposes that businesses direct 98 percent to the federal government [$8.8 trillion] and keep 2 percent for themselves. . . "

Would the Warren plan prohibit the next government from requiring employers to pay a vastly more "onerous contribution" in the future? Of course not. The Warren plan would also raise taxes on corporations and their investors by some $6.3 trillion, according to Kessler, so any ephemeral promise of reducing companies' insurance premiums by 2% for a year or two is hardly great news for American business.

This article by Alan Reynolds first appeared at the Cato Institute.