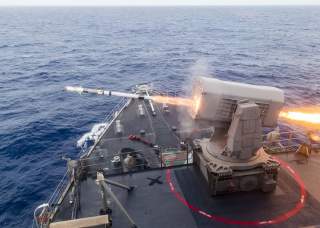 It’s good news, obviously, that Defense Secretary Mark Esper says he is “fully committed” to getting the U.S. Navy up to 355 ships. That number has been in decline for decades. In 1987, the Navy had 594 ships. Today that number is 294. For those who lack context, 294 ships sounds like a lot. And it is.

But — and here’s the bad news — it’s insufficient to perform what the National Defense Strategy demands. To understand why the Navy needs at least 355 takes a little explaining.

First, though, let’s consider where the Navy’s requirement for 355 ships came from. It’s the result of the Navy’s December 2016 force structure assessment (FSA) of the multiple types of warships it needed to “address the ever-evolving and increasingly complex threats the Navy is required to counter…” It is not, as some have claimed, an unconstrained “wish list.” Indeed, the FSA balanced “an acceptable level of warfighting risk to our equipment and personnel against available resources and achieves a force size that can reasonably achieve success.”

When the FSA was established, the Navy was under the guidance to be prepared to “defeat one adversary while denying the objectives of a second.” Now, nearly four years later, the Department of Defense operates under a new National Defense Strategy, prioritizing the need to engage in “long-term, strategic competition,” focusing on the revisionist powers, China and Russia, while countering efforts of Iran, North Korea and terrorism.

The new strategy arguably places a greater demand on maritime power as the United States seeks to counter Chinese efforts to “coerce neighboring countries to reorder the Indo-Pacific region to their advantage,” as well as deal with other state and non-state threats. So it should be expected that a properly conducted 2020 Force Structure Assessment, one that has been promised for months, should express the need for at least 355 ships.

Our assessment performed in October 2018 for example, suggested a Navy of 400 battle force ships was now necessary. Other respected think tanks have said a fleet of 462 may be needed.

The United States is a maritime power with global interests. It has made security commitments to NATO, as well as many other countries such as Japan and South Korea. It has a vested interest in ensuring the free passage in the global commons such as the South China Sea, through which at least $3.4 trillion dollars of commerce flows annually, and the Persian Gulf where at least 21% of the world’s oil is transported.

Protecting America’s interests in the maritime domain demands both presence and the ability to surge in multiple regions. When a force of either 294 or 355 ships is divided among various regions, and necessary subtractions are made for maintenance and train-up periods, the number of ships actually available in key areas such as the South China Sea or the Indian Ocean is very modest.

Meanwhile, over the course of the last two decades, China has built one of the most formidable navies in the world. It now has more than 400 warships and submarines. Since 2014, China has built more ships than the United Kingdom has in its entire fleet.

“But, but, but…” people will respond, China doesn’t want war with the United States. And that is probably true. But it is also true China is building navy ships at an incredible rate, are militarizing reefs in the South China Sea with aircraft hangars and anti-ship missiles, and their admirals have suggested the best way to defeat the U.S. is to “sink two American supercarriers.”

So, for the United States to have the best chance to avoid war with China and others, a modern, capable Navy of sufficient size and capacity is needed to send the clear message that any attempt to use military force to intimidate a neighbor or threaten U.S. interests will ultimately be unsuccessful. The ability of the U.S. Navy to maintain an enduring and credible naval presence around the globe, but especially in the waters near potential adversaries, provides a more significant deterrent than U.S. military forces stationed back stateside.

It’s at this point in the story that resourcing rears its ugly head. Because even though the Navy has set 355 ships as its goal, no matter how you slice the sausage, it isn’t funded to reach that number of ships and keep them manned, trained and maintained. When the Chief of Naval Operations, Admiral Michael Gilday, admitted as much last month by saying “we need more money,” he made quite the stir in Washington.

Now the Pentagon is doing backflips trying to produce a plan showing they are on a funded path to achieve 355 ships within a reasonable amount of time. Leaked documents between the Office and Management and Budget and the Pentagon reflect that tension.  The newly released 2021 defense budget request shows a planned decrease in the number of ships planned to be procured next year. Secretary of Defense Mark Esper recently said that while he is fully committed to a fleet of 355 ships or larger, “what we have to tease out is, what does the future fleet look like?” also suggesting that a fleet of “lightly manned ships” might allow DOD to get to the 355 ship goal faster and presumably more cheaply.

Lightly manned ships may very well be a part of the solution. But resource constraints must be applied after the assessment, not before or during. Above all, we need our nation’s national security leaders’ best recommendations what is needed to execute the defense strategy, and then it is up to the administration and Congress to provide the necessary resources or to recommend changes to the strategy.

Despite a growing realization of new threats the country now faces, defense spending in the United States as a portion of the GDP and federal budget has shrunk to historic lows, 3.2 and 15 percent respectively. The level of the 2021 defense budget was determined as part of the Bipartisan Budget Act of 2019 and even though it represents a flat line from 2020, as a hard-fought political compromise, it is going to be hard to increase.

In future years, however, America must make the hard choices to put the Navy on a solid footing towards achieving the force structure our nation needs. We have done it before, after all. And let’s not forget the stakes: If the U.S. Navy can no longer ensure a free and open global maritime commons, our nation will be less safe.

Thomas Spoehr is the Director of the Center for National Defense at The Heritage Foundation (heritage.org).