Why the WHO Estimate on the Coronavirus Death Rate Is Wrong 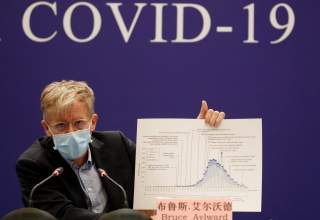 “Death Toll Hits 9 as Outbreak Spreads,” was the scary Wall Street Journal headline in print before it was toned down online. COVID-19 deaths at a nursing home and hospital in Washington state were unrelated to the virus spreading “across the U.S.” The facts tell us much more about the exceptionally high risks of fatal infection from COVID-19 (or pneumonia or flu) among elderly people living close together in nursing homes or hospitals, many of them already sick.

The ongoing COPD-19 outbreak in Kirkland Washington at the Life Care nursing home and Evergreen hospital represents high‐​risk concentrations of vulnerable seniors. Among those who died in Washington, all but two were in their 70s or 80s (the other two in their 50s) and most had “underlying health conditions.” Evergreen hospital has two more in critical condition, in their 70s and 90s, both with underlying conditions.

What we just learned from Washington was already known from China’s experience A February 24 article by Katarina Zimmer in The Scientist provides an excellent summary:

“The latest data from China stem from an analysis of nearly 45,000 confirmed cases, and on the whole suggest that the people most likely to develop severe forms of COVID-19 are those with pre‐​existing illnesses and the elderly.While less than 1 percent of people who were otherwise healthy died from the disease, the fatality rate for people with cardiovascular disease was 10.5 percent. That figure was 7.3 percent for diabetes patients and around 6 percent for those with chronic respiratory disease, hypertension, or cancer. While overall, 2.3 percent of known cases [in China] proved fatal—which many experts say is likely an overestimate of the mortality rate, given that many mild cases might go undiagnosed—patients 80 years or older were most at risk, with 14.8 percent of them dying.”

The Scientist article point about the death rate being “less than 1 percent” among the healthy and also the point about the 2.3% Chinese estimate being a “an overestimate” because “many mild cases might go undiagnosed” underscore similar points I made in a March 2 blog. My concern is that misinformation about COVID-19 has fueled excessive fear of the virus by greatly exaggerating the actual death rate per hundred people infected (the infection fatality rate).

I suggested that if we took unreported mild cases into account, the actual death rate among infected people outside China may be as low as 0.5%. Skeptics greeted death rates of 0.5–1.0% as Panglossian heresy. Yet the rigorous February 10 study I cited, from Imperial College London, concluded the global infection fatality ratio was about 1.0. My estimate is lower than 1.0 because I exclude China where (I argue) high fatality rates in Wuhan were exaggerated by overcounting institutionalized elderly with serious infection.

On February 29, Denise Grady, The New York Times’ veteran health and medicine reporter, independently came to conclusions not unlike those Katarina Zimmer and I did within a few days of each other – namely than fewer than 1% of people infected with COVID-19 are likely to die from it, and that the odds of death are lower that that for healthy non‐​elderly people. Ms. Grady explained these facts in The New York Times as follows [with emphasis added]:

“Early estimates of the coronavirus death rate from China, the epicenter of the outbreak, have been around 2 percent. But a new report on 1,099 cases from many parts of China, published on Friday in The New England Journal of Medicine, finds a lower rate: 1.4 percent. The coronavirus death rate may be even lower, if — as most experts suspect — there are many mild or symptom‐​free cases that have not been detected. The true death rate could turn out to be similar to that of a severe seasonal flu, below 1 percent, according to an editorial published in the journal by Dr. Anthony S. Fauci and Dr. H. Clifford Lane, of the National Institute of Allergy and Infectious Diseases, and Dr. Robert R. Redfield, director of the Centers for Disease Control and Prevention.”

Despite two health science writers and one economist trying to warn people that widely hyped mortality rates greatly exaggerate the risk (not to mention Drs. Fauci, Lane and Redfield) exaggerated estimates continue to grab the headlines.

On March 4, The New York Times reported, “Dr. Tedros Adhanom Ghebreyesus, the organization’s director general, said in a news conference in Geneva that… ‘Globally, about 3.4 percent of reported Covid‐​19 cases have died.” “By comparison,” he added, ” seasonal flu generally kills far fewer than 1 percent of those infected.”

To the newspaper’s credit, The New York Times apparently felt obliged to caution readers that the WHO’s 3.4 percent death rate is quite implausible, if not wildly inaccurate: “The figure does not include mild cases that do not require medical attention and is skewed by Wuhan, where the death rate is several times higher than elsewhere in China. It is also quite possible that there are many undetected cases that would push the mortality rate lower. Still, it was the first time that the organization had offered a global mortality rate for the disease.”

Ironically, my previous blog quoted Dr. Tedros Adhanom saying, “Most people will have mild disease and get better without needing any special care.”

Because most cases are mild, as he said, and because mild cases are excluded by definition from “reported cases,” the WHO’s alleged 3.4% mortality rate is nothing more than sensationalist nonsense.

This article by Alan Reynolds originally appeared in the CATO at Liberty blog in 2020.