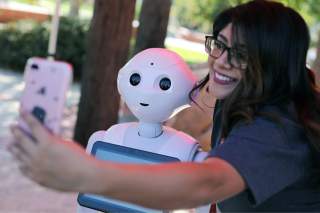 The rise of ever-smarter Artificial Intelligence (AI) has sparked a fierce debate about its impact. Tech optimists see AI/Big Data as revolutionizing society—from creating new jobs to transforming healthcare, education, cybersecurity and transportation. AI pessimists, whose ranks include prominent scientists and technologists such as Stephen Hawking, Elon Musk and Bill Gates fear a dystopia with AI/Big Data displacing jobs, fostering a 1984 surveillance state, and threatening the very future of humanity.

One major concern is that AI will not only foster more inequality in the West, but also may rob developing nations of the investment-driven, export-led growth model that spawned the Asian economic miracle over the past forty years. The fear, outlined in an Oxford University research project, is that automation will negate developing nations’ cheap labor advantage. In addition, it is argued, AI will also displace outsourced remote centers that have thrived in places like India and the Philippines for customer service, banking, health, insurance and accounting.

Such a tech nightmare is one possible future that may lie over the horizon. But the evidence that the tech revolution will destroy more jobs than it creates is still lacking. For example, the four leading economies that deploy 80 percent of the world’s industrial robots—the United States, Germany, Japan and China have historically low unemployment, 3.7 percent in the United States, and a twenty-four-year low in Japan of 2.7 percent. And we have already seen technological leapfrogging in Africa, India and elsewhere as the mobile phone revolution (some 800 million in India; 750 million in Africa) and its multiplicity of apps have improved banking, agriculture, and transport, among other things.

In any case, there are already hints that AI could have a transformational impact on developing countries. This can be discerned from Cloud-based current AI applications for disaster relief, healthcare, agriculture, and finance. Moreover, local tech hubs (a workspace with incubators to aid startups) are sprouting up across the developing world—618 to date across Africa—from Lagos, Dakar, Nairobi, Cairo and Cape Town—suggesting a foundation and prospective source for AI applications. Ethiopia, for example, has launched a multi-billion tech initiative, and a leading AI software developer iCog has produced an array of apps facilitating development. While past performance is no guarantee of future success, there are encouraging signs.

One example is enabling predictive models for disaster relief, which are likely to soon also apply to hurricanes and floods. Using drones, Big Data, and geospatial mapping, first responders can analyze and prioritize where to distribute supplies, and governments can better scope out reconstruction needs. This is what occurred in Nepal in the aftermath of a 2015 earthquake, as drones assessed in real-time the location and the magnitude and locale of destruction, and mapped the distribution of emergency supplies. Similarly, AI is also aiding relief agencies and NGOs to better manage and prioritize the delivery of supplies to refugees fleeing conflict zones.

AI is also proving to be a powerful tool for rural areas in less developed countries to overcome the disadvantages of distance in accessing services. One case in point is Rwanda, where a Silicon Valley startup is partnering with its health ministry to allow drones to deliver medical supplies and blood on short notice to isolated rural areas. Combined with mobile phones, AI can process large amounts of data to digitize health data, aid physicians with diagnosis, and predict and model the spread of disease. Telemedicine can extend the reach of doctors from anywhere to remote areas.

Together with energy services, education is a key enabler of development. AI can have a multiplier effect by providing online tutoring and educational services to isolated areas lacking in teachers and books.  Online classes and e-textbooks at the secondary level can be offered by teachers in Lagos, Dakar or Dar es Salaam, increasing exponentially the reach of education services.

One can envision smart cities, and a model of decentralized growth, with villages powered by wind/solar/geothermal renewables with microgrids providing local sources of power to access the internet, use online services, power 3D printed local manufacturing and finding markets around the globe.

However, such a best-case scenario is unlikely under current circumstances, regardless of available technologies.  Realizing such potential requires good governance, the right mix of policies, stable regulatory and investment environments, transparency, incentivizes for local and foreign tech investment, and broadening connectivity. In Ethiopia today, for example, despite its emphasis on a high-tech future, fewer than 5 percent of its 105 million citizens have access to the internet.

Key bottlenecks to a future realizing tech potential are connectivity, reliable energy, and a persistent shortage of talented developed human resources to deploy and advance AI. Better governance is only part of the solution. Obtaining the resources to achieve such goals requires help.

That may depend on the United States and China's, the leading AI powers, willingness to create opportunities to train developing nation technologists, engineers and scientists, and facilitating connectivity to lay the basis for success.

Robert A. Manning is a Senior fellow of the Brent Scowcroft Center for Strategy and Security at the Atlantic Council and its Foresight, Strategy and Risks Initiative. He served as a senior counselor to the Under Secretary of State for Global Affairs from 2001 to 2004, as a member of the US Department of State Policy Planning Staff from 2004 to 2008, and on the National Intelligence Council (NIC) Strategic Futures Group, 2008-12 Tweet: @Rmanning4.