Will the Army Use Israel's Trophy System 'Tank Shield'? 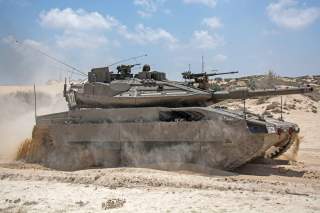 Key point: The Trophy system is a neat technology that might not be all its made out to be.

For years, American tank crews could only gnash their teeth while their Israeli and Russian counterparts enjoyed active-protection systems to stop rockets from destroying their vehicles.

Envy turned to hope in 2016, when the U.S. Army finally decided to begin testing APS defenses for its armored vehicles. Then earlier this month, the Army announced that it would fit 261 M-1 Abrams tanks—enough for three brigade combat teams—with Israel’s Trophy APS system.

But will these antirocket defenses really work? A Pentagon inspector’s report last month suggests that, because of problems with testing, the Army can’t even be sure of APS’s effectiveness.

The Army chose three APS candidates: Rafael’s Trophy for Army M1A2 and Marine Corps M1A1 tanks, Israel Military Industries’ Iron Fist for the M2 Bradley infantry fighting vehicle, and the Iron Curtain from American firm Artis for the Stryker armored vehicle. All three systems use radar to detect incoming antitank rockets, which are then intercepted by shotgun-like projectiles fired from the vehicle. Only Trophy has completed Phase I initial trials, which included assessing whether dismounted personnel are endangered by fragments, engaging two incoming threats simultaneously, and determining whether metallic clutter on the ground would interfere with Trophy’s radar.

The Phase I Trophy demonstration did show promise, according to the 2017 annual report of the Pentagon’s Office of the Director, Operational Test and Evaluation (DOT&E). “Phase 1 Trophy live fire testing demonstrated the ability of the APS to successfully intercept two of the three class threats tested and the potential to provide improved protection against these threats when compared to the existing systems without APS.”

But how valid were these tests? The trials were performed “under benign range conditions and simple threat scenarios inhibiting an assessment of the APS performance with confidence,” DOT&E found.

“Tests were severely limited in realism by unexpected system corrections, calibrations, and limitations imposed by the contractors,” the report concluded. “Some contractors also communicated several unexpected performance limitations of their APS systems, requiring extensive modification of planned test events. Because of these and other limitations, it is reasonable to assume that any performance reporting from Phase 1 is optimistic and needs to be confirmed in more operationally realistic conditions in Phase 2.”

- The test configuration was different from what would be used in the field. “The Army conducted testing on assets that were not configured for combat, and often lacked critical components such as a functional engine,” reported DOT&E. “This inhibited the ability to assess any adverse effects of the APS on vehicle power generation capability.”

- The five-thousand-pound weight of Trophy hampered tank performance. “The crew could not traverse the turret manually on slopes greater than 5 degrees and power traverse capability was degraded on slopes greater than 8 degrees. Technical analysis indicated a high likelihood of delays between pulling the trigger and the main gun round actually firing.”

- The manufacturer had strong influence over the testing. “In many cases, the Army allowed Rafael to adjust the test events to be conducted, provide exclusion zones, and precondition systems with software fixes,” DOT&E said.

- Penetration tests did not use realistic armor plate. “The test design did not incorporate suitable means for quantifying residual vehicle penetration because rolled homogeneous armor plates were used as witness material in lieu of the complex armors present on the Abrams.”

- Phase I testing of the 450-pound Iron Fist has been delayed because “the fielded Bradley A3 does not generate sufficient power to operate the APS. The Bradley A4, which is currently under development, does generate sufficient power, so power components from the Bradley A4 must be integrated into the APS test asset.” Phase I testing of the 5,700-pound Iron Curtain has been delayed because some components have been replaced, including the radar.

To be fair, Phase 1 is just initial familiarization testing. More rigorous trials will be performed during Phase 2 operational testing and Phase 3 final testing.

Nonetheless, while it is not uncommon for any initial testing of new technology to run into problems, DOT&E warned that the Army will have to answer several key questions during the Phase 2 demonstrations. For example, even if an antitank rocket is intercepted by an APS projectile, is there collateral damage that could harm the vehicle or nearby personnel? What about maintenance, or resupply of APS antimissile projectiles?

DOT&E also recommended that testing focus more on what happens to the vehicle and its crew, rather than how APS intercepts the antitank rocket.

Michael Peck, a frequent contributor to TNI, is a defense and historical writer based in Oregon. His work has appeared in Foreign Policy, WarIsBoring and many other fine publications. He can be found on Twitter and Facebook. This first appeared in February 2018.