Will the B-52 Bomber Fly Forever? 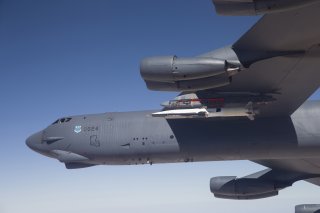 Will the B-52 Stratofortress fly forever? It certainly seems realistic that the time-tested Vietnam-era bomber could serve for as long as one hundred years, given the scope and reach of longstanding upgrades to the platform.

The aircraft, once known for massive carpet bombing in high-value enemy target areas, is now a cyber-resilient, electronic-warfare-armed, hypersonic-missile firing, digitally-networked bomber equipped with a new generation of air-dropped bombs and precision-guidance cruise missiles. This transformation is so significant that the classic B-52 bomber may ultimately fly for a century.

The multifaceted upgrade program is based upon the fundamental premise that the decades-old airframes themselves are sturdy, strong and extremely viable moving into the future. Some reinforcement and maintenance are crucial for the structures, but Air Force weapons developers say they have withstood the test of time.

Apart from the airframes, today’s B-52 bomber is an altogether different aircraft than it was at its inception, given the massive and comprehensive scope of the upgrades. The B-52 is equipped with an entirely modern, cutting-edge and forward-looking series of new technologies intended to catapult the plane into the modern threat environment. The upgrades have spanned decades and encompassed such a wide sphere of systems and technologies there are almost too many to cite.

Years ago, the Air Force embarked upon sweeping upgrades to the aircraft’s communication system intended, among other things, to enable more real-time, in-flight intelligence gathering. The system, called Combat Network Communications Technology (CONECT), brings a digital backbone to the B-52 bomber’s ability to bring crucial mission details such as new target information, terrain data, enemy activity or intelligence. An Air Force press statement dated July 14, 2016,  when CONECT was first being installed, quotes Alan Williams, deputy program element monitor at Air Force Global Strike Command, as saying “CONECT maintains a common operating picture between crew stations on the plane, so it is like installing a local area network line in your home.  All the screens in the plane are wired to pick up the same channel.” With CONECT, pilot crews do not need to solely rely upon pre-programmed targeting and mission information, but can rather receive crucial real-time updates en route to targets and adjust to changing threat circumstances.

Of course, the B-52 bomber is also being re-engined—a significant performance enhancement to the aircraft. The most substantial or impactful upgrade, however, may be the multiyear transition to a new internal weapons bay for the B-52 bomber, an adjustment that greatly expands the weapons-carrying capacity of the platform. The new internal weapons bay upgrade effort, which has unfolded over a period of many years in increments, adds an ability to fire laser-guided Joint Direct Attack Munition, the Joint Air-to-Surface Standoff Missile (JASSM) and the JASSM extended-range missile. The weapons expansion also includes an ability to fire the miniature Air-launched decoy and its jammer variant.

In a paradigm-changing fashion, the B-52 bomber is also preparing to fire hypersonic weapons too. This development will enable the bomber to conduct high-speed, high-altitude attacks at five times the speed of sound. As part of the preparation to arm the bombers with hypersonic weapons, the Air Force conducted a simulated shot of an AGM-183 Air-Launched Rapid Response Weapon at a range of six hundred nautical miles.