Will the B-52 Bomber Really Fly for 100 Years? New Upgrades Have the Answer 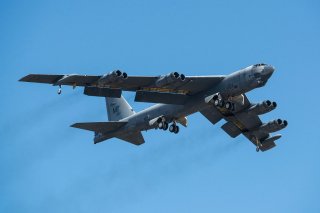 Is it possible that the Vietnam-era B-52 bomber flies for 100 years? The aircraft is now seventy-years-old and may fly into the coming decades due to a series of recent and upcoming upgrades.

Years ago, Air Force weapons developers recognized that the B-52 airframes themselves were viable, despite the aircraft’s age. Thus, engineers have been working for years to reinforce the structure of the airframe and integrate a wide range of modern upgrades. These include a new CONECT radio system capable of using digital networking to share real-time intelligence data in flight, keeping pilots aware of fast-emerging new targeting information.

Even more recently, the B-52 has been in the process of being prepared to fire air-launched hypersonic weapons, cruise missiles, and even yet-to-exist weapons. The most recent development has been efforts to replace its legacy engine with a new, more fuel-efficient commercial engine designed to reduce fuel burn and maintenance requirements.

“This brings an ability to bring in more reliable piston engines and a digital backbone. If I want to be effective in an electronic attack, I need to have that digital side,” former Air Force Global Strike commander Gen. Tim Ray told The Mitchell Institute for Aerospace Studies in a video interview last year.

Along with an entirely new radar system, the B-52 is integrating new communications and networking technologies, which include a rapid, retargeting low-frequency radio replacement to support nuclear weapons communications. But perhaps of greatest significance, the datalink radio communications technology enables flight crews to receive intelligence updates and real-time targeting adjustments in flight, removing the need for attack crews to rely purely on pre-mission intelligence data.

The bomber has also in recent years been receiving a newly configured Internal Weapons Bay Upgrade (IWBU) enabling the aircraft to internally carry more JDAMS (Joint Direct Attack Munitions), Joint Air-to-Surface Standoff Missiles (JASSMS), and a weapon called the Miniature Air Launched Decoy, or MALD-J jammer variant. The emerging IWBU, which relies upon a digital interface and a rotary launcher to increase weapons payload, allows the B-52s to carry up to eight of the newest “J-Series” bombs.

In part due to these adaptations, the B-52 will become much more lethal with the addition of several futuristic weapons such as the now-in-development nuclear-capable Long Range Standoff Missile. Perhaps of greatest significance when it comes to weaponry, the Air Force plans to fire hypersonic weapons from the B-52. Last year, the Air Force completed a simulated shot at a target 600 nautical miles away with an AGM-183 Air-Launched Rapid Response Weapon. During that test, a B-52 received target data from sensors 1,000 miles away at Joint Base Elmendorf-Richardson, Alaska, according to a previous Air Force report.