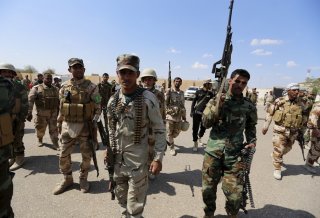 Although Biden’s decision to attack Iranian-proxies in Syria was criticized by some Democratic and Republican lawmakers, the president was steadfast in his position that the airstrikes were consistent with the U.S right to self-defense. Biden later warned Iran to tread carefully, cautioning that the regime “can’t act with impunity.”

The Syria operation shows Biden is willing to use force to defend American lives. However, this operation appears to be an anomaly when considering what we know about Biden’s current Iran policy. Reentering the 2015 nuclear agreement with Iran remains a top priority for Biden. Tehran knows this and has taken advantage of the leverage this issue has given it over the new U.S. administration.

Since the onset of Biden’s presidency, Iran has threatened to slash International Atomic Energy Agency inspections, produced dangerous levels of uranium-metal that could be used for bombs, and seized a South Korean tanker in an attempt to press Seoul to release billions of dollars in frozen assets. In addition to these provocations, Iran has directed its region-wide proxies to conduct attacks targeting American interests in Iraq, Yemen, and Syria.

Up until the February 26 Syria operation, the Biden administration has maintained a reconciliatory approach to Iran. Three days prior to the operation, South Korea’s foreign ministry confirmed it had reached a deal with the Biden team to free the billions of dollars in Iranian frozen assets. In Yemen, the Biden team removed the Houthi rebels from the U.S. Foreign Terrorist Organization list. Two days following this delisting, Biden officials were forced to warn the Houthis to halt its ongoing terror attacks against civilians.

Biden’s decision to strike Iranian assets in Syria was the right call. The retaliatory measure could alter the Iranian regime’s impression that Biden and his administration have a high tolerance when it comes to Tehran’s proxies and their attacks on U.S. personnel and interests. Going forward, Iran will likely continue to test Biden’s resolve with its militias region-wide. The Biden administration should minimize further concessions to Iran and work with Israel and its Gulf allies to coordinate and deter its regional ambitions.