Will China Steal Its Way to a Space Race Victory? 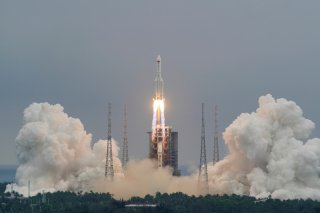 Well, China just did it again.

China’s state-owned rocket manufacturer, the China Academy of Launch Vehicle Technology (CALT), recently released a video showcasing a new rocket that appears to be a near carbon copy of SpaceX’s Starship rocket.

While this news is concerning, it shouldn’t come as much of a shock. For years, the Pentagon has been warning legislators that China is building up an arsenal of space weaponry that’s not only incredibly similar to our own but also puts America’s space infrastructure at a significant disadvantage. Richard Fisher, an expert in China’s military affairs at the International Assessment and Strategy Center, put it this way, “[China] is aiming to achieve control of low earth orbit in order to defeat the United States on Earth.”

While Fisher put it bluntly, he isn’t wrong. From 2011 to 2013 alone, China carried out thirteen successful hacks on NASA computers. So, the communist regime certainly isn’t above stealing tech and intellectual property from private U.S. space contractors such as Elon Musk’s SpaceX.

In fact, SpaceX has been one of China’s prime targets. The apparent copy of Starship is not the first time that SpaceX has seemingly been the subject of China’s theft. Musk has already claimed that China stole software from his car company, Tesla, which is a national security problem since SpaceX also uses that same software.

None of this should come as a surprise considering how closely Musk is intertwined with China. Not only has Musk moved more of his operations to the country, but the communist regime also helped Tesla secure over $1 billion in loans back in 2019. This concerns America’s foreign policy because China’s Military Civil Fusion strategy mandates Chinese entities work in tandem with their government when necessary to advance its strategic interests. By operating so close to the Chinese—and in some cases, even on the communist regime’s turf—Musk is making it far too easy for the country to lift his technology for its predatory purposes.

At a recent online seminar, former NASA administrator Daniel Goldin warned that if the United States does not start making some changes, China could soon become the world’s leader in space exploration. He’s right. In this new space race, we need all the help we can get. We can’t and shouldn’t exclude any company or contractor from participating in helping us defeat China. At the same time, however, rules need to be put in place to ensure the safety and security of American lives.

Past legislative attempts have been made to prevent China from benefiting from its business ties with private U.S. space entities. Last year, former Senator Cory Gardner proposed amendments to the NASA Authorization Act that would have ordered the Government Accountability Office to review NASA contractors for any business ties to China and consider any involvement with China when awarding contracts. While Congress didn’t take up this legislative language last year, it might be worth re-visiting and re-proposing these amendments to protect America’s national security interests. Regardless of whether Gardner’s solution represents the best approach, however, it’s clear that Congress needs to do something to confront this growing threat from China before it’s too late.

Jerry Rogers is the Vice President of the Institute for Liberty and the host of the ‘Jerry Rogers Show’ on WBAL News Radio. Follow him on Twitter @JerryRogersShow.