Will the Coronavirus Derail Putin's Plan to Reform His Government? 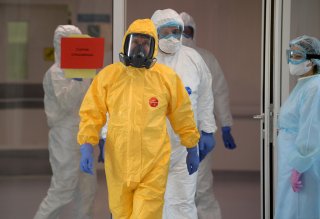 Russia’s nationwide vote on controversial constitutional reforms is likely to be postponed as a result of the coronavirus pandemic. The vote is currently scheduled for April 22.

The vote is the last hurdle before this set of reforms – including a change allowing Vladimir Putin to stay in the presidency beyond 2024 – can come into force.

Russian press has reported that a decision to postpone the vote has already been taken by the Kremlin, but a new date has yet to be selected.

The Kremlin has been unwilling to publicly acknowledge that the global coronavirus pandemic could affect the vote. As of March 24 in Russia, there were 438 confirmed cases of COVID-19, the disease associated with the new coronavirus, and one death from it.

Shortly after setting April 22 as the polling day in a decree signed on March 17, Putin mentioned possible adaptations that would allow the vote to go ahead as planned, despite the coronavirus pandemic. These included increasing the distance between voting booths and increasing the number of mobile ballot boxes, which could be taken directly to people’s homes.

Putin also noted that there was nothing legally stopping the authorities from setting a new date for the vote.

Behind the scenes, however, it’s clear that the Kremlin has been planning for the possibility of postponement for a while. A direct reference to April 22 was removed from Putin’s reform bill during its passage through the State Duma, the lower chamber of the national legislature. Russia’s Central Electoral Commission has also asked regional commissions to stop publishing information on the vote.

This vote is crucial for Putin. He first announced his constitutional reform project on January 15, taking politicians and commentators by surprise.

After seizing the initiative, Putin continued to dictate the agenda and pace of change, including with the shock removal of Prime Minister Dmitry Medvedev’s government on the same day.

The Kremlin’s initial insistence to push ahead with the vote is a reflection of this same determination to set, and stick by, the timetable of change.

During his January speech, Putin promised a transfer of power away from the presidency. But, once his legislative bill proposing changes was introduced into the State Duma, it seemed that presidential powers would, if anything, increase. And this further concentration of power in the presidency was confirmed with changes made to the bill during its passage through parliament.

This cluster of reforms – including giving the president the power to appoint lifetime members of the legislature and fire top-tier judges – provides the basis for a “mega-presidency” in Russia. These changes are not welcomed by everybody.

Holding the vote during the pandemic would advantage the Kremlin in some ways. Planned protests in Moscow and St Petersburg have already been called off as a result of measures taken by the authorities to deal with COVID-19. If the vote is pushed back, it would be harder for the authorities to clamp down on opposition mobilisation against the reforms.

The Kremlin’s reluctance to delay the vote also shows how much it hopes to gain by securing nationwide support for the proposed changes. Although Putin initially pitched the constitutional reform package as a response to changes in Russian society, nearly half of Russians recognised its core aim was to sort out how Putin would remain in power after 2024, the year his current presidential term ends. This became even clearer when Putin endorsed an amendment to his own reform bill allowing him to run for the presidency again in 2024 and stay in office until 2036.

This all makes the vote a plebiscite on support for Putin, not on the details of the reform package. The ballot paper will only include one question: “Do you approve of the changes to the Constitution of the Russian Federation?” But in practice, many Russians will interpret this as “do you approve of Vladimir Putin?”

For those who don’t approve of the president, the political leadership hopes apparently generous promises of social support will persuade them to vote “yes”.

The Kremlin is keen for a public endorsement afforded by the nationwide vote in light of the fall in approval ratings for the regime following unpopular pension reforms made in 2018.

The regime leadership is also mindful of the need to signal Putin’s popularity to members of the elite, who might be tempted to start planning for a post-Putin future. As research on the wider politics of authoritarian rule shows, palace coups are more worrying than popular uprisings to leaders in non-democracies like Russia.

The vote is not technically required to make Putin’s proposed changes to the constitution. Since the reforms do not make changes to chapters 1, 2, or 9 of Russia’s basic law, article 136 of the Russian constitution says that such amendments come into force following their approval by two thirds of legislative assemblies in Russian regions. That already happened on March 12.

But Putin proposed the nationwide vote in an attempt to boost the legitimacy of the changes. That meant it was key to ensure a strong turnout – of at least 60%, according to the latest instructions from the Kremlin to deputy regional governors who are responsible for internal politics. Putin will now likely have to wait.

The worry for the Kremlin is that, with falling oil prices and a significant drop in the value of the rouble, it might be even harder to mobilise Russians to vote for Putin’s changes when a later date is selected.

Ben Noble is a Lecturer in Russian Politics at UCL.