Will Donald Trump Become The First U.S. President To Be Impeached Twice? 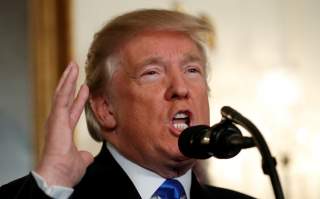 Key point: There is nothing constitutionally that would prevent the House from undertaking a second impeachment investigation...

On the day the Senate acquitted President Donald Trump in his impeachment trial, a headline in The Atlantic stated that a second impeachment could be America’s only hope.

Less than a month later, Rep. Adam Schiff, D-Calif., is denouncing Trump again, saying that “it would be a blatant abuse of power if President Trump has in fact intervened to reverse the recommendations of career prosecutors at the Department of Justice.”

Schiff led the impeachment effort as chairman of the House Intelligence Committee and, later, as the head of the seven impeachment managers in the Senate trial.

The California Democrat condemned, as an abuse of power, Trump’s tweet about supporter Roger Stone’s impending sentencing in federal court. Abuse of power was one of the House’s two articles of impeachment against Trump in the Ukraine matter.

“Adam Schiff seems to believe everything Trump does is an abuse of power,” Curt Levey, a constitutional lawyer and president of the Committee for Justice, told The Daily Signal.

“Democrats will be smart enough not to impeach him again for the same charge,” Levey said. “But if we take Schiff at his word—which might be a mistake—even if it was a legitimate acquittal, if he thinks the Senate trial was a sham that would give Democrats even more standing in their minds to impeach again.”

Lawyer and pundit George Conway wrote in The Washington Post this week that the House should impeach Trump again, this time for removing Army Lt. Col. Alexander Vindman from the National Security Council staff and transferring him to a job in the Pentagon. Vindman testified against Trump during the House impeachment hearings.

Even before the long-expected Senate acquittal, several other House Democrats were warning they would impeach Trump for a second time.

“Politically and practically it might be tough, but where is this starting from? It’s not from a specific act,” Levey said. “It started with a pretext that ‘This is a dangerous man and a criminal and we have to find a reason for impeachment.’”

The Democrat-controlled House voted Dec. 18 to impeach Trump for abuse of power and obstruction of Congress in connection to his July 25 phone call with Ukrainian President Volodymyr Zelenskyy.

According to an official White House transcript released by Trump, the two leaders talked about former Vice President Joe Biden’s role in ousting a top Ukrainian prosecutor who was investigating the Ukrainian energy company that put Biden’s son, Hunter Biden, on its board.

The House vote was along party lines. Only four Democrats didn’t vote for at least one of the two articles of impeachment.

The Republican-controlled Senate acquitted Trump on both charges Feb. 6, losing only one Republican—Mitt Romney of Utah—on the abuse of power charge.

Because the Democrats’ base has called the Senate trial a “sham,” Levey said, another House impeachment in 2020 is quite plausible.

Shortly after the Senate verdict, Rep. Al Green, D-Texas, told BuzzFeed that the House stands “ready to bring charges” if Trump commits impeachable acts, and also to impeach the president again for acts he “already committed.”

“My belief is that the House of Representatives is on watch,” Green said.

Rep. Maxine Waters, D-Calif., chairwoman of the House Financial Services Committee, led the “Impeach 45” movement long before Trump’s impeachment over the Ukraine matter. Waters is leading an investigation into the president’s financial records.

In January, Waters said on MSNBC: “The subpoenas that I have issued that have gone through the lower courts are now going to be heard at the Supreme Court in March. We will not stop. Whether or not that leads to another impeachment activity, I don’t know.”

Also in January, ABC News anchor George Stephanopoulos asked Pelosi: “You said he’s violating the Constitution again and again. Do you think it’s possible that the House might have to file new articles of impeachment?”

Pelosi responded, referring to the Senate trial that was still ahead: “Well, let’s just see what the Senate does. The ball will be in their court soon, and as I say, we think the American people have been very fair about saying, ‘Yes, we do want to see witnesses.’”

In an interview, TMZ asked Rep. Karen Bass, D-Calif., if she would reintroduce articles of impeachment. Bass said that notion was “absolutely right.”

“Because even though we’re impeaching him now, there’s still a number of court cases,” Bass told TMZ. “There’s a ton of information that could come forward. For example, we could get his bank records and find out that he’s owned 100% by the Russians. … The odds of that—sadly enough—is that he probably has other examples of criminal behavior.”

Despite such comments, Rep. Ben Cline, R-Va., who was part of impeachment hearings as a member of the House Judiciary Committee, said he doubts Democrats will try impeachment a second time.

“I know they are obsessed with continuing investigations of this president,” Cline told The Daily Signal on Wednesday. “It’s not out of the realm of possibility.”

“But because the Democrats essentially took their best shot and fell short, and now we are seeing exactly the bounce this president has gotten in polls and the momentum he has gained from being acquitted, I think they may have learned trying and failing doesn’t get them where they want to be,” Cline said.

The Atlantic’s White House reporter, Peter Nicholas, wrote Feb. 5 that Trump would feel emboldened by his acquittal and that “it’s reasonable to assume he won’t change his approach to politics now that the impeachment saga is done.”

“But if any impediment might cause Trump to pull back, it’s the prospect of getting impeached a second time,” Nicholas wrote.

There is nothing to prevent House Democrats from impeaching Trump again, but they likely would face some political consequences, said Hans von Spakovsky, a senior legal fellow at The Heritage Foundation.

“There is nothing constitutionally that would prevent the House from undertaking a second impeachment investigation, but I believe it would be an abuse of power and misuse of the impeachment power,” von Spakovsky told The Daily Signal.

Levey said that it’s highly unusual for courts to be involved in impeachment proceedings. However, in extreme circumstances, legal and constitutional grounds might exist, he said.

“This would be an extreme example, but if the House began sending articles of impeachment to force a Senate trial once per month, at some point courts would say this is unreasonable,” Levey said. “This would be unreasonable abuse, and tying up the executive branch. It could interfere with separation of powers.”

His article first appeared in The Daily Signal earlier this year.