Will the First Steps of the U.S.-Taliban Peace Deal Be Enough? 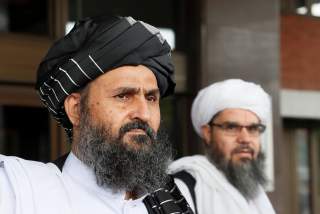 After a weeklong reduction in violence in Afghanistan, the United States and the Taliban are set to sign a peace agreement in Doha, Qatar, on Feb. 29. Both sides hope the deal will be the first step toward ending U.S. involvement in the Afghan war and bringing peace to a land that has been in an almost constant state of war since 1979. Two of the most important points of the agreement include the eventual withdrawal of U.S. troops from Afghanistan and a promise from the Taliban that it will not allow transnational militant groups to use the country as a base. Once it's signed, the next step will be talks among the Afghan government, the Taliban and other parties to establish a durable cease-fire and eventually end the country's war. But the road ahead will be strewn with pitfalls.

Among the stickiest issues to be addressed that could derail peace talks or cause other complications is the size of the U.S. security footprint in Afghanistan. As a U.S. withdrawal begins, the size and composition of its contingent in the country will be a point of contention. The strength of remaining conventional U.S. military forces, the number of troops devoted to counterterrorism operations and remaining U.S. intelligence assets will be points of contention. The Taliban has firmly maintained a public stance of demanding the withdrawal of all foreign forces, while the United States seems intent on maintaining a presence.

The timeline of the U.S. withdrawal will also be an issue. The Taliban's willingness to accept a gradual drawdown will be tested if the United States delays the date for a full withdrawal or insists on keeping a smaller force on the ground. If the United States decides to unilaterally withdraw regardless of circumstances on the ground, the Taliban would have a freer hand to exert its own power in the country. Regional powers such as China, Russia and Pakistan would likely move to fill the vacuum left behind.

The other major unresolved issue revolves around the Taliban's pledge to not allow militant groups such as al Qaeda and the remnants of the Islamic State to use Afghanistan as a base of operations to launch attacks elsewhere. This will be a paramount issue for the United States, considering the Taliban's role in sheltering al Qaeda when they controlled the country, allowing the group to launch attacks on U.S. soil on Sept. 11, 2001. After all, those events prompted the United States to invade Afghanistan in the first place.

The Taliban's willingness or ability to cut its ties with al Qaeda remains unclear. Their relationship spans decades; many al Qaeda fighters are embedded within the Taliban's ranks, and al Qaeda leaders have pledged loyalty to the Taliban. These ties mean that the group, or some of its constituent factions, may be unwilling to cut the jihadists off. Even if the Taliban is willing to clamp down on al Qaeda, the notoriously rugged landscape of Afghanistan will make it difficult for them to completely root out its members. U.S. officials have also warned that the Islamic State branch in Afghanistan (the Khorasan Province or IS-K) could launch attacks against the West. But since the Taliban view the group as an enemy, that ameliorates U.S. concerns that it would be allowed to operate in the country.

The intra-Afghan talks set to follow this peace agreement have their own significant set of complications, starting with the Taliban's view of the current U.S.-backed government in Kabul as illegitimate. Questions that those talks must address include power-sharing agreements and the potential integration of the Taliban into any future government. The Afghan government itself has been riven by internal strife. After months of delay, incumbent Ashraf Ghani emerged in mid-February as the winner of the presidential election held in September. But his chief opponent, Abdullah Abdullah, has challenged the result and threatened to set up a parallel government. Those fractures will stall peace talks or, potentially more damaging for Washington, give the Taliban a stronger hand at the negotiating table.

While the Taliban reportedly agreed to a broad reduction in violence, the decentralized nature of the group will make this difficult to fully enforce. As seen in September 2019, any attack that results in a U.S. casualty could set the peace talks back to square one. There is also the potential for disgruntled factions who oppose the peace deal to splinter from the main body of the Taliban — which is far from a monolithic entity — to form splinter groups, prolonging violent threats and even creating new ones. The proliferation of weaponry and explosives in the country, plus the absence of centralized controls, create an environment conducive to a continued insurgency. These developments could also prove to be a boon for IS-K. While it saw major setbacks in late 2019, it still commands hundreds of fighters, whose ranks could swell if militants disgruntled by a U.S. peace deal decide to join. After all, Taliban defectors formed the nucleus of IS-K, and it stands well-positioned to resurge. And if it does, the United States could decide to extend its presence, or rely more on other powers to take up counterterrorism operations.

The U.S. and Taliban Prepare to Take a First Step Toward Peace in Afghanistan is republished with the permission of Stratfor Worldview, a geopolitical intelligence and advisory firm.