Will Israel Break Up With Burma? 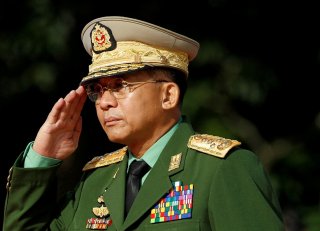 In his first foreign policy-related speech as president, given February 4 at the State Department, President Joe Biden spoke about the “close cooperation with our allies and partners” as he addressed the recent coup in Burma. The United States, he said, will “work with our partners to support restoration of democracy and the rule of law and impose consequences on those responsible.”

That’ll be a cinch, right? A look at Israel, which was not among the allies and partners Biden went on to name, suggests the reverse. Israeli ties to the Burmese military may make the country well-positioned to impose consequences but getting Jerusalem to do so is another story.

Burma and Israel have been on friendly terms since establishing relations in 1953. Desperate for overseas clients, Jerusalem has had no qualms about doing business with the junta that has ruled the Southeast Asian nation for much of the time since then.

That business has not just been the commercial kind. For decades, Israel has reportedly shared intelligence with and provided training to Burma’s armed forces. Defense exports, including the Super-Dvora MK III patrol boat, have also proliferated in recent years. Army chief Min Aung Hlaing, now the de facto leader of Burma, notably visited Israel in 2015.

The Israel-Burma defense relationship has not been without controversy. Following international outcry over the military’s purported ethnic cleansing of the Rohingya minority, the Israeli Supreme Court heard a petition in 2017 to halt arms sales to Burma. But it put a gag order on the ruling, forcing the public to wonder whether the moratorium had gone through. The attendance of Burmese military officers at a defense expo in Tel Aviv two years later gave little assurance that it had. The Israeli government shortly thereafter banned Burmese officials from such exhibitions in an attempt to save face.

If Israel is still in fact exporting weapons to Burma, it joins the likes of China, Russia, and North Korea as the country’s few arms suppliers. Though it would do well to leave this unbecoming club, the record shows that is far from a sure thing. Jerusalem was a prominent military partner of Apartheid-era South Africa and today remains especially protective of its own defense sector, which exported $7.2 billion worth of weapons in 2019. As is the case for many other countries, interests almost always trump values in Israeli diplomacy.

Absent U.S. pressure, the Israeli government is unlikely to take action against Burma besides issuing tepid criticism. The Biden administration, which has already said it may impose new sanctions, should also consider sanctioning those equipping the Burmese military or doing business with affiliated firms if it’s serious about neutering the junta. Such stringent action, or at least the threat of it, could be the only way to get Israel to rethink its defense relationship with Burma.

It’s encouraging to hear President Biden talk about renewing America’s alliances. But platitudes about cooperation do not guarantee good results. As this example shows, talk alone might not make allies and partners come around to Washington’s position. Force is often the best way to get what you want in international relations, even from your friends.

Daniel J. Samet is a Ph.D. student at the University of Texas at Austin.