Will Joe Biden Lose the Arctic to Russia or China? 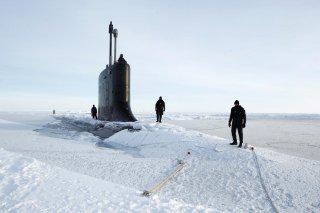 The cold polar wastelands of the Arctic have become the latest front in the growing Cold War between Russia and China on one side and the United States and its allies on the other. This comes alongside expectations of ice-free sea lanes opening up in the region.

Major media outlets ridiculed former President Donald Trump when he suggested buying Greenland from Denmark in 2019. They missed the strategy. China has its eyes trained on Greenland’s mineral resources, and so did Trump apparently.

Greenland has the largest concentration of untapped rare earth minerals in the world. The rare earth supply chain is of the utmost concern to the U.S. military because 80 percent of the rare earths it uses come from Chinese sources.

Had the Danes agreed to the transfer, which Danish prime minister Mette Fredericksen dismissed immediately, it would have given the United States a direct veto over China’s rare earth ambitions on the island. Recent election results indicate that locals in Greenland aren’t any keener on having China exploit the island’s natural resources than Donald Trump was. A left-wing environmental party won this month’s election and may freeze out the Chinese due to the harm that extracting these metals has on the environment.

Decreasing ice coverage in Greenland in recent years has increased interest in tapping the island’s rare earth metal supply, which is essential for all sorts of defense and civilian industrial purposes. The State Council Information Office of the People’s Republic of China published a white paper titled “China’s Arctic Policy” in January 2018.

“The utilization of sea routes and exploration and development of the resources in the Arctic may have a huge impact on the energy strategy and economic development of China, which is a major trading nation and energy consumer in the world,” the white paper said.

It claimed that global warming and decreasing sea ice in the Arctic means that nations that don’t immediately border the Arctic have as much of an interest in Arctic affairs as countries. China thus refers to itself as a “Near Arctic State,” even though it lies hundreds of miles from the Arctic Circle. Beijing stated its interest in a “Polar Silk Road” as part of its Belt and Road Initiative to “facilitate connectivity and sustainable economic and social development of the Arctic.”

Greenland is but one of many fronts in Arctic competition, as the potential of melting sea ice has Russia and China looking for ways to exploit resources under the ice. The Chinese built an icebreaker, the Xue Long, that carried out a survey mission in 2017, which provided valuable information about the future economic and trade feasibility of the region. China is investing in nuclear-powered icebreakers, polar-capable cargo vessels, liquified natural gas tankers, and other means of improving its access to the Arctic. It likely views the region as the shortest way to trade with Europe, shaving off days and thousands of miles compared to shipping via the Suez Canal and the Indian Ocean.

China aims to develop a military presence in the Arctic to secure its economic interests. Increased deployments by the Chinese navy in the region are likely, a U.S. Navy report from January said. Its military deployments in the Arctic could begin as deployments of its paramilitary coast guard.

China and Russia have worked closely together to develop gas and oil resources in Siberia. Chinese state companies play an important role in Russia’s Arctic LNG 2 project, which largely will benefit China and other points in East Asia. 80 percent of Russia’s natural gas and 17 percent of its oil reserves lie in the Arctic.

Russia also has its eyes on its own rare earth deposits. Some estimates suggest that Russia has 19 percent of the world’s rare earth supply, but it only extracts 2 percent.

Moscow has also has built up its military in the region to enhance its ability to control its territory and assert control over sea routes. Russian military exercises in the Arctic have increased. Last month, three Russian submarines surfaced through the ice in an exercise. Russia’s air force also plans operations.

“The military strengthening of Russia in the Arctic is part of the economic strategy,” Ilya Kramnik, a junior research fellow at the IMEMO think tank in Moscow, told Defense News recently.

Countering Chinese and Russian buildups in the Arctic requires a comprehensive strategy to protect U.S. interests in and around Alaska and the Canadian Arctic from encroachment. Alaska Gov. Mike Dunleavy warned of his unease with these activities in a column that appeared in The Daily Caller.

“The need to protect the Arctic from foreign exploitation and aggression is not simply a future concern. Several months ago, Russian warships ordered Alaska fishing crews out of America’s exclusive economic zone in the Bering Sea,” Dunleavy wrote, pointing to the U.S.-Russian maritime border in the Bering sea. “In violation of international agreements, Russian officials have made it clear that the Northern Sea Route is theirs to control.

“Likewise, China has a long history of making outlandish territorial claims in the South China Sea and violating treaties at will.”

Both the Navy/Marine Corps and the Army have been developing strategies aimed at keeping China and Russia at bay. So far, both branches currently only have vague, ill-defined strategies for deterring either power.

The final strategy must work to keep shipping lanes open and to defend the economic interests of the U.S. and other NATO nations and deny Russia and China access to their Exclusive Economic Zones (EEZ) in the Arctic.