Will Kalashnikov Assault Rifles Finally Be Made in South America 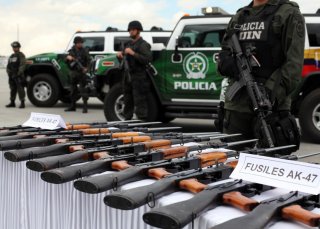 Due to the ongoing sanctions against Russia, it is impossible to import a newly produced civilian Kalashnikov rifle into the United States, which is where Kalashnikov USA fills the void. Kalashnikov USA manufactures and markets firearms for the civilian market in America, and is able to do so as it maintains essentially no ties with its Russian counterpart. However, the Russian-based Kalashnikov Group of Companies could soon produce military small arms on this side of the world—in South America.

TASS reported this week that the Russian firearms maker is negotiating joint production of small arms with a number of South America-based companies. Apparently, officials from Kalashnikov held meetings to discuss potential partnerships at last week’s SITDEF 2021 arms show, which was held at the Peruvian military’s main base in Lima.

According to the reports, negotiations are underway with a number of companies about the possibility of organizing joint production, but no solid agreements have been reached yet. According to the company’s press service, Kalashnikov has eyed Brazil as one of the potential production sites.

“The Kalashnikov Group of Companies is ready to consider establishing production under license in South American countries, for example in Brazil,” it said.

The firearms manufacturer had a deal with the Venezuelan government and began to build a plant in 2019. The plant was supposed to manufacture around twenty-five thousand Kalashnikov AK-103 assault rifles annually. However, this past January it was reported that the efforts to finish construction of the plant were derailed due to the COVID-19 pandemic. It seems that instead of going forward with that plant, the company is eyeing other potential partners.

While no South American AK platform has been produced yet, the original AK-47 was actually produced throughout Europe, Asia, and even Africa. Interestingly, during the Soviet era the government in Moscow—which essentially maintained ownership over the design—never sought license deals.

In fact, China became the largest producer of the original AK-47. Production in China originally began in 1956 at State Factory 66 with the assault rifle designated the Type 56. Production was subsequently handed over to Norinco and PolyTech, and both have continued to manufacture it for export. Even today those Chinese companies pay no license to Moscow for the original AK design.

More than twenty countries including Albania, Armenia, Azerbaijan, Bulgaria, Cuba, East Germany, Egypt, Ethiopia, Finland, Hungary, India, Iran, Iraq, Israel, Nigeria, Norther Korea, Pakistan, Poland, Romania, Sudan, Ukraine, and Yugoslavia/Serbia among others have produced a variant of the AK-platform. Interestingly the Egyptian-made civilian variant Maadi ARM was the first to be imported into the United States, while the Pakistani models were created by hand-copying assault rifles captured by Afghan forces during the war with the Soviet Union in the 1980s. The Afghan and Pakistani copies are considered the worst AKs ever made!

After the collapse of the Soviet Union, the Russian government via its state-owned companies has sought to profit on the AK platform. Even today, the JSC Kalashnikov Concern—known as Izhevsk Machine-Building Plant until 2013—is fifty-one percent state-controlled via Rostec. The actual AK-47 trademark had also belonged to Mikhail Kalashnikov’s family until April 2016, when the Kalashnikov Concern won a lawsuit to invalidate the registration of the trademark.