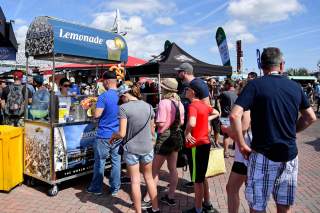 The Maryland House Environment and Transportation Committee on Tuesday heard testimony about a bill that would prevent local governments from outlawing children’s lemonade stands on private property.

Yes, you read that right. It’s illegal in Maryland for children to run lemonade stands in their families’ yards unless they obtain all the licenses, permits, and inspections needed to run a food-service business.

Just ask Xander Alpier, who testified at the hearing.

In 2011, when he was just 6, Montgomery County fined his family $500 (but later waived it after public outcry) for running an illegal lemonade stand to raise money for the Georgetown Children’s Cancer Center.

They were lucky they got just a $500 fine. The county could have imposed thousands of dollars in fines and sent them to jail.

Maryland law makes it a crime punishable by up to 90 days in jail to operate a lemonade stand without all the proper licenses and permits. A second offense could bring up to a year in jail.

A bipartisan pair of Maryland delegates—Neil Parrott, a Republican, and Steve Johnson, a Democrat—think it’s not right to punish children for this classic foray into entrepreneurship.

At the hearing on Jan. 28, Parrott called lemonade stands as American as apple pie and baseball, and Johnson explained that his own childhood lemonade stand was a building block of his own entrepreneurship.

The bill, HB 52, is narrow in scope. It applies only to the sale of lemonade or other non-alcoholic beverages by children on private property.

Members of the committee seemed supportive of the bill. Democratic Delegates Vaughn Stewart and Brooke Lierman, and Republican Delegate Gerald Clark, all expressed support for it.

Only one delegate, Democrat Anne Healey of Prince George’s County, expressed opposition to it. Healey asked why the state should take away local governments’ power to regulate lemonade stands.

That’s the wrong question. The right question is: Why should local governments have the power to send children to jail for operating a lemonade stand absent all the licenses and permits required of restaurants?

The answer is easy: They shouldn’t.

Healey also worried that the law would deprive local governments of the power to regulate lemonade stands that were set up “in the way of traffic” or by children “doing something dangerous.”

I, for one, can’t imagine what dangerous things children operating a lemonade stand would be doing. But as to traffic, the bill only applies to lemonade stands “on private property.”

What’s more, the bill only prevents local governments from requiring licenses, permits, or fees from lemonade stands. If, by some strange happenstance, a lemonade stand posed a danger to people, the bill would not stop local authorities from taking lawful action to protect them.

Given that no other delegates publicly echoed Healey’s concerns, it seems that the bill has the support necessary to move on in the legislative process, although it likely has to pass through the Subcommittee on Local Government and Bi-County Agencies—which Healey chairs.

Legislative obstacles notwithstanding, this bill would be a victory for children eager to take their first steps as entrepreneurs, or as in Xander’s case, to raise money for charity.

“We just thought we could do some good,” Xander said at a press conference before the hearing.

It’s a shame that Montgomery County didn’t see it that way, but it’s heartening that some members of the Maryland General Assembly do.

GianCarlo Canaparo is a legal fellow in the Edwin Meese III Center for Legal and Judicial Studies at The Heritage Foundation. His article first appeared in The Daily Signal.