Will Mud Prevent a Russian Invasion of Ukraine? 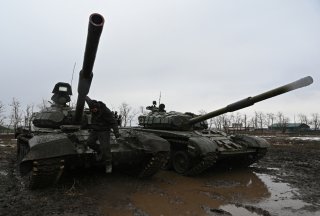 It has been said that Russia's weather helped save the motherland from numerous invasions. While harsh winters played a major role, so too did the Russian mud that came from the fall rains and spring thaws. “Rasputitsa” is the Russian term for the two seasons of the year—spring and autumn—when travel on unpaved roads across the vast plains of the country becomes difficult due to the muddy conditions.

The term literally translates to "thaw," but it has come to mean "time without roads."

The Rasputitsa may have saved Novgorod from conquest during the 13th century Mongol invasion, and Napoleon's forces were greatly slowed by the mud during the French invasion of Russia in 1812. The months-long Rasputitsa certainly slowed the German advance during the Battle of Moscow in the fall of 1941, which may have helped save Moscow from capture.

"The roads rapidly became nothing more than canals of bottomless mud, along which our vehicles could only advance at a snail's pace and with great wear to the engines," German General Heinz Guderian lamented after the march on Moscow ground to a halt.

Moving many tanks in the winter months could be a complicated affair even today. With this in mind, a Russian invasion of Ukraine may have not occurred yet simply because the ground isn't frozen solid enough.

According to American estimates, the ground in Ukraine will be at "peak freeze" around February 15.

However, Russian president Vladimir Putin may have also been forced by Xi Jinping to wait until the conclusion of the Winter Olympics in Beijing. But with the games ending on February 20, that might not leave much time before the spring thaws begin. By March, the season of mud could make it challenging to move Russian main battle tanks (MBTs).

While foreign invaders learned about the mud the hard way, it is just a fact of life for many Russian soldiers. Whether the ground is frozen or muddy may be just one consideration in any decision.

"There are multiple factors, the ground is one of them, but it's not in itself determinative," said Rob Lee, a fellow at the Foreign Policy Research Institute. "Russia is well versed in operating in this area."

Russia has many heavy tanks, and hundreds of them passing over the same ground will certainly leave it worse for wear. Yet heavy MBTs are just one part of Russia's vast arsenal, and the country has plenty of light tanks and other vehicles.

"The Russian military trains in all types of weather … ­their training cycles extend all year round, so they do have some familiarity with shifting ground conditions," Dara Massicot, a senior policy researcher with the Rand Corporation, told Foreign Policy.

While the Rasputitsa may matter, it won’t save Russia like it did in the past. It may slow down an advance, but it likely wouldn't be enough to stop it.