Will the Quad Evolve and Embrace Taiwan? 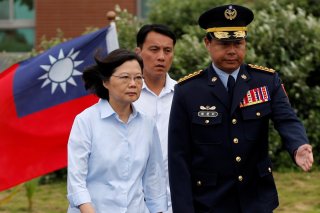 Providing security to Taiwan has long been a contested debate in the Indo-Pacific. Such a debate has gathered momentum with the emergence of the Quad (comprising Australia, India, Japan, and the United States) based on the notion of preventing Chinese aggression. While a consensus among the four countries to nurture a “free, open, prosperous and inclusive” Indo-Pacific appears to be obvious, an agreement on defending Taiwan’s security is not so. In this regard, where does Taiwan, as a critical “territorial” and “sovereignty” issue in the Indo-Pacific figure in the Quad formulation?

Beijing’s membership as one of the permanent five at the United Nations Security Council and its strong position as an economic actor and a global power in various multilateral fora are critical variables that have shaped the Quad countries’ cautious approach vis-à-vis Taiwan. The Quad consensus is based more on how to defend the rules-based order vis-à-vis China’s revisionism. However, the same has not been visible in how each of the Quad members visualizes Taiwan’s security given Taipei’s strong and enduring regional connections in the Indo-Pacific. Such a gap in the Quad’s outlook has become more poignant post the recent statement by Wu Qian, spokesperson of China’s Ministry of National Defense, that “Taiwan Independence” means war.

The Quad has moved ahead with two ministerial meetings—Bangkok in 2019 and Tokyo in 2020—to signify the importance of freedom of navigation, transparency, and the rule of law in the region. However, national perspectives based on bilateral consensus with respect to China have limited the creation of a cohesive and united regional security outlook. Taiwan’s security does matter to the Quad countries, but they project a broad-based outlook on Taiwan rather than an agreement-based standpoint. Amidst the Biden administration’s proposal to take the lead by organizing a Quad leadership summit, Taiwan becomes an immediate strategic priority.

Building consensus on Taiwan’s future will invariably be a complicated chapter for the Quad. In fact, alluding to the non-negotiable “One China” policy propounding that Taiwan is a part of mainland China has long been a nationally heralded position of all the Quad members. However, in a case-by-case assessment, the United States would be open to providing security to Taiwan via the Quad as the Taiwan question presents itself more as a “status-security” dilemma in its great power rivalry with China. Taiwan’s merger with mainland China would only build a stronger China that further questions the status of the United States in the future international order. The passing of the 2019 TAIPEI Act and the Taiwan Assurance Act signed into law in 2020 are clear developments to this effect. Yet, the American security blanket on Taiwan appears non-committal (and largely unconvincing) about the extent to which the United States would engage in a bilateral confrontation with China to defend Taipei’s security, particularly as one of the crucial pillars of U.S.-Taiwan relations remain underscored by Washington’s policy to not support Taiwan’s independence, or a “two China“ policy.

For India, lack of clarity in Taiwan’s public position on the India-China boundary dispute has created a political gap between Taipei and New Delhi, which has enlarged further given India’s careful outlook to promote an engagement with equilibrium and developmental partnership with China. Even though the recent border tensions between India and China in the Galwan Valley have amplified the strategic mistrust; still neither India nor China are in favor of abandoning their developmental partnership so easily. Hence, an overture to support Taiwan’s cause, or retracting from the “One China” policy, only becomes an extreme possibility for New Delhi in the event of a full-scale India-China war, something that Beijing decided to carry out against India in 1962. Until then, for India, Taiwan is more economic than political, and Quad-based support would invariably depend upon the extent to which its three Quad partners, primarily the United States, decide to back Taiwan.

Japan’s stand would heavily be drawn on the position that its alliance partner, the United States, decides to take. Tokyo’s discord is primarily linked to Taipei’s claim on the disputed islands of Senkaku/Diaoyu and Japan’s colonial chapter with Taiwan. Tokyo’s overture to a Quad-based backing for Taiwan would be drawn on its own security mandate. Further, Chinese occupation of Taipei exposes severe vulnerabilities for Japan’s national security in Pacific Ocean region, prompting a rethink of Tokyo’s “One China” policy as well as broader support for the Quad’s incorporation in Cross-Strait ties. Besides, for Tokyo, a retraction from the “One China” policy means complicating the Japan-China economic relationship which is a strong pillar of Japanese trading economy.

For Australia, there is little motivation to revisit the “One China” policy, despite “all-time low” ties with Beijing. China-Australia ties are primarily founded on a one-dimensional economic paradigm rather than direct security conflicts. However, a militarist occupation of Taiwan would significantly hurt Canberra’s own Pacific economy, leading to an emergent need to revisit its China outlook. Canberra’s present China outlook draws from the alliance it shares with Washington; hence, its backing for Taiwan within the Quad framework will be linked to this very assertion.

In essence, the Quad can evolve to cooperate with Taipei as a crucial dialogue partner under the “Quad plus Taiwan” format, but this will require further discussions and consensus to revisit their fundamental outlook towards Taiwan. The Quad grouping remains more concerned with China’s growing economic and military prowess than Beijing’s claims to occupy Taiwan. Yet, extending support to Taiwanese security can, in fact, aid the Quad’s regional goals of balancing China and ensuring a free and open Indo-Pacific. A foremost step would be to revisit the official use of “Taiwan” over “Chinese Taipei”—a term some of the Quad members currently employs in official parlance (such as flight schedules or the Olympics). This would be an indication of the Quad’s collective resolve regarding the Taiwan issue, therefore sending a strong message to Beijing.

As a major hub of high-tech value chain manufacturing, Taiwan can be a crucial addition to the alternative global supply chains that the Quad nations are attempting to build in the post-pandemic world. It could, for instance, be a crucial part of the India-Australia-Japan proposed Supply Chain Resilience Initiative (SCRI), particularly considering the global importance of its semiconductor industry. Taiwan’s defense manufacturing sector can also be of critical value to the Quad vis-à-vis its interactions with China. Furthermore, Taiwan could find political synergy with the Quad as a member of the emerging “Quad Plus” framework. It can be a key geographic connector between the Indian and Pacific Oceans building third-country cooperation along the way to strengthen its own diplomatic outreach. For instance, it can become a part of the Japan-U.S.-Australia-funded underwater cable with Palau (Taiwan’s ally) that is meant to balance China’s growing presence in the Indo-Pacific.

China’s 2005 Anti-Secession law, Xi Jinping’s statement that Taiwan “must and will” be reunified and that Beijing has not renounced using force to achieve this goal strenuously highlights the real threat Taiwan faces. Given the Quad’s inaction to formulate a coordinated response to China’s imposition of a national security law in Hong Kong, they must strive to take pre-emptive action when it comes to the Taiwan issue. In other words, Taiwan must emerge as the defining arc of the Quad’s institutionalization. All Quad members must revisit, if not change, their commitment to the “One China” policy in the new security environment. Simultaneously, they must also seek to build strategic synergy with Kuomintang (KMT) and Democratic Progressive Party (DPP), the two major political parties of Taiwan.

Importantly, the impetus to build such synergy lies on Taiwan as well. Although the Quad has shown some support to Taiwan, this support is embedded in their own worsening ties with Beijing. Nonetheless, for Taiwan to receive meaningful support, it must build synergy with the United States, India, Japan, and Australia bilaterally that translates to its inclusion in the “Quad plus” framework. In other words, Taipei must exhibit its value addition in deterring China’s regional and global authoritarian expansion within the Quad’s strategic prism.

Dr. Jagannath Panda is a Research Fellow and Centre Coordinator for East Asia at the Manohar Parrikar Institute for Defence Studies and Analyses, New Delhi. Dr. Panda is Series Editor for “Routledge Studies on Think Asia.”