Will Raisi Build a New Iranian Beachhead in Latin America? 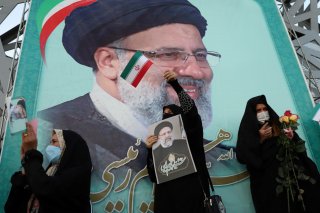 It was not quite like the investiture on the throne of an Achaemenid emperor. Yet, last week’s inauguration of the brand-new Iranian president Ebrahim Raisi was not a low-key affair either. A total of 115 officials from seventy-three countries were present at the oath-taking ceremony, including ten heads of state, eleven foreign ministers, and ten other ministers from different countries. If these headcounts signify anything, it suggests that Iran matters in global politics. More so when we sit down to dissect what the new president had to say to his assembly of guests at his inauguration and later in his one-to-one meetings with those who matter.

There are copious amounts of analyses on the usual topics such as the nuclear deal, relations with the United States, the rise of the Taliban on Iran’s eastern flank, and so on. What is overlooked in this melee of inquiry is the often-ignored aspect of Iran’s position in Latin America. For the uninitiated, Iran has a very strong tie to this continent stretching back to the 1960s. While Tehran’s early interaction with the continent was founded on the commonality of economic interests in multilateral forums such as the Organization of the Petroleum Exporting Countries (OPEC), the relationship assumed an ideological bent once the clerics took over the Iranian state way back in 1979.

Ever since, Iran has been building ideological, strategic, and military bridges with various Latin American regimes and states with varying degrees of success. The elephant in the room, however, is what common ideological and strategic bonds these faraway countries in a remote continent could possibly have with Tehran? The name of the beast is the United States of America. It is no secret that several Caribbean and Latin American countries in the past quarter of a century have openly expressed their avowed aversion towards Washington and its strong-handed tactics in the continent. It is this sentiment that Tehran has come to exploit in Latin America in recent years.

Aligning itself to the prevailing anti-American ideologies in the region, Iran has steadily built alliances with regimes from Bolivia, Cuba, Ecuador, Nicaragua, and Venezuela. The clearest manifestation of this is the Bolivarian Alliance for the Peoples of Our America, formally known as ALBA. A brainchild of Cuba that was established in 2004, ALBA has ten members in the Caribbean and Latin American region. An umbrella grouping, it is held together by ideas of socialism, social welfare, regional economic integration, bartering, and mutual economic aid. And the most important ideology of all is its anti-Americanism.

Although not full members, both Iran and Syria enjoy the observer’s status in ALBA. It is noteworthy that Raisi would pick up on Iran’s role in this multilateral forum immediately after assuming office. Among the select interactions that Raisi had, as part of Tehran’s urgent foreign policy priorities, was with Sacha Sergio Llorenti Soliz, ALBA’s secretary-general. To reiterate Iran’s commitment in the region, Raisi said: “Iran is determined to further strengthen its political and economic relations with the member states of the union, and this is in line with the common values and positions of the two sides.”

Is this declaration a one-way initiative? If we confine our discussion to the level of rhetoric, both Iran and ALBA would seem to be singing from the same hymn sheet. On its part, ALBA appeared more than warm to the idea of renewed Iranian interest in the region. ALBA aims to promote relations between its member states and the Islamic Republic of Iran. Furthermore, that some Caribbean and Latin American regimes are keen to have Iran on board in their anti-American stance was evident in Lloenti Soliz’s declaration in his meeting with Raisi. On the issue of common aspiration, Llorenti Soliz stressed the regional will to defend the independence and sovereignty of nations and to stand up to "excessive U.S. demands" as values shared by Iran and ALBA.

Is this declaration just bonhomie expected of a newly appointed head of state? Or is there something much more to Raisi’s declaration? That Raisi is planning to go the whole hog when it comes to locking his horns with the United States in Latin America and the Caribbean was evident with his remark that “undoubtedly, activating the level of cooperation between Iran and Latin American countries can make the Americans and other arrogant people passive.”

True, Iran has had several setbacks in Latin America and the Caribbean lately. Many of its investments in Venezuela did not accrue expected political dividends in the region. Its planned mining ventures with Ecuador petered out owing to U.S. sanctions. A joint military school that Tehran had planned to build in the altiplano regions of Bolivia was scrapped after Evo Morales lost his presidential bid. Elsewhere, in Nicaragua, the relationship has soured over loan repayment issues. Simply put, there’s a lot going against Iran in Latin America and the Caribbean now. But Raisi’s proclamations suggest Iran is not willing to give up. Under Raisi we might see renewed attempts at Teheran using ALBA as a beachhead for diplomatic, commercial, and ideological expansion into Latin America and the Caribbean.

Should Washington Be Worried?

The high noon of Iranian-Latin American relations was during the presidency of Iranian president Mahmoud Ahmadinejad and his Venezuelan counterpart Hugo Chávez (2005-2013). During this period, both Iran and Venezuela became serious irritants to Washington in the region. Ever since, Iran’s power and influence in Latin America and the Caribbean have been directionless. Given his open hostility towards the United States and to cement his image as a great leader at home and abroad, Ebrahim Raisi may truly pick on Washington in its underbelly. But given its crippled economy and multifaceted domestic challenges, putting Iran’s flag on this faraway continent may just prove a little too much for Raisi.

Amalendu Misra is Professor of International Politics in the Department of Politics, Philosophy & Religion, at Lancaster University.