Will the Royal Air Force Have Enough F-35s to Do Its Job? 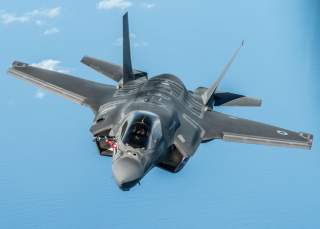 Key point: London needs to get its priorities straight so the Royal Air Force is ready for the future.

The Royal Air Force is about to receive its 160th and final Eurofighter Typhoon fighter. The end of the United Kingdom’s Typhoon acquisition underscores the country’s struggle to maintain an effective fighter force.

The final Typhoon, a Tranche-3 model, should arrive at its home station sometime in 2019. The fighter already has completed test flights at the facilities of BAE Systems, one of the major companies in the Eurofighter consortium.

“The aircraft is now undergoing installation of further equipment and systems, with dedicated tests in between,” Scramble magazine reported.

While the RAF has bought 160 Typhoons since production began in the late 1990s, the U.K. air arm actually operates just 116 Typhoons. The balance have been written off in accidents or retired from service. With final deliveries the Typhoon fleet could expand to as many as 126 fighters.

Fifty-three of the RAF’s Typhoons are of the oldest Tranche-1 variant and lack some of the sensors, software and weapons options of the newer Tranche-2 and Tranche-3 models.

The RAF has decided to keep just 24 of the older Typhoons in service, primarily for air-defense and aggressor duties. The newer Tranche-2s and Tranche-3s fulfill an expeditionary fighter-bomber role with guided weapons such as the Paveway bomb, Brimstone anti-tank missile and Storm Shadow cruise missile.

As of June 2019 the RAF possessed 102 Typhoons and 17 F-35B stealth fighters in eight front-line units. The last squadron of 1980s-vintage Tornado fighter-bombers disbanded in February 2019.

Plans are in place to begin growing the fighter force. The defense ministry insists it ultimately will buy 138 F-35s for the RAF through the 2020s. If the RAF keeps in service all 126 Typhoons and completes the F-35 buy, it could operate as many as 264 fighters around a decade from now.

But there are reasons to doubt the fighter force will grow that much. As of mid-2019, the United Kingdom has ordered just 33 vertical-landing F-35Bs against a near-term inventory goal of 48 of the fighters.

The F-35s would embark on the Royal Navy’s two Queen Elizabeth-class carriers and also deploy for land-based operations.

Many observers believe London has no intention of ever paying for 138 F-35s. But David Simpson, a former RAF pilot and defense ministry manager, has an idea for why it just might do so.

As recently as 2015 the RAF planned to operate F-35Bs in just four front-line squadrons, each with 12 ready fighters, plus one training unit, for a total of 60 ready jets.

Each of the navy’s two Queen Elizabeth-class carriers has space for around 40 fighters. For the next decade or so as the RAF F-35 fleet slowly expands, it’s unlikely the RAF will have the capacity simultaneously to embark fighters on both carriers. It’s not for no reason that the Royal Navy plans to embark on its carriers contingents of U.S. Marine Corps F-35s.

The RAF might acquire as many as 30 extra F-35s as an attrition reserve to complement the 60 ready planes. But even then, the fleet would number just 90 F-35s, 48 short of the 138-plane objective.

But the RAF also could acquire conventionally-landing F-35As in order to partially replace the venerable Tornado bombers that the service finally retired in early 2019.

The early Typhoons have helped to preserve mass in overall RAF fighter fleet, freeing up late-model Typhoons to handle ground-attack missions in the Tornados’ absence. But the older Typhoons lack key upgrades and likely will retire from service before 2030, Simpson asserted.

“This also implies a likely commitment to buy about 40 F-35As by 2030 to replace those two Tranche-1 Typhoon squadrons alongside the required F-35B buy now to provide additional airframes.”