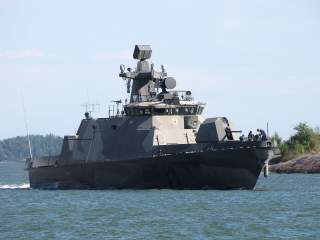 Considering that the most likely targets for Finnish anti-ship missiles are Russian ships, this may be of some interest to Moscow.

Under the $190 million sale, Finland will buy Gabriel 5 missiles, manufactured by Israel Aircraft Industries. The Finnish missile will be designated as the Surface to Surface Missile 2020, or SSM2020. It will replace the MTO85M, the Finnish version of the Sweden's Saab RBS15 anti-ship missile. The Israeli missile defeated some formidable competition for the Finnish contract, including America’s Harpoon, France’s Exocet, Sweden’s RBS15 and Norway’s Naval Strike Missile.

The Gabriels will be installed on Hamina-class missile boats and on Squadron 2020 corvettes, which are scheduled to be launched beginning in 2019. The missiles will be delivered in 2019 through 2025.

“The surface warfare capability of the Finnish Navy includes the use of missiles, naval mines and coastal artillery fires,” said a Finnish Defense Ministry news release. “The missile is capable of long range effect and can also be able to be used against land targets. The new system will create a deterrent and a threat to the adversary as well as a capability for Finland to respond to the threats of the modern and developing battle field also in the future.”

The Gabriel Mark 5, also known in Israel as the Advanced Naval Attack Missile, is Israel’s equivalent of the U.S. Harpoon missile. The weapon “uses an advanced active radar seeker and a sophisticated weapon control system to achieve very high operational effectiveness,” according to manufacturer IAI. It can select targets in congested waters and those sailing near the shore where radar clutter is a problem, is resistant chaff and jamming, and can “penetrate hard-kill defenses,” IAI says.

The Gabriel was developed in the 1960s and first saw combat in the 1973 Yom Kippur War, where it proved effective in sinking Arab vessels in some of the first missile-only naval battles in history. Various Gabriels arm several navies, including those of India, Sri Lanka, Mexico and Azerbaijan, while past operators have included Singapore, South Africa and Taiwan.

But the Gabriel 5 is a bit of a mystery, even as to whether Israel’s Advanced Naval Attack Missile really is the Gabriel 5. While the earlier models had a range of fifteen to thirty-five miles, various reports have put the latest version’s range at around 100 to 150 miles.

One naval-warfare blog goes into an extensive analysis of what is known about the weapon. The Gabriel 5 does “does sport and active radar seeker, and while Israel has no archipelago whatsoever, they are situated close to one of the world’s busiest shipping lanes with the number of civilian and neutral vessels vastly outnumbering those of potential targets at any given time. This means that the missile should feel right at home in the Baltic Sea.”

But those are technical details. A broader question is why Finland is buying from Israel, and why Israel is selling one of its most advanced missiles (and which apparently has not been sold to anyone else). Note that earlier this year, the U.S. government approved a Finnish navy request to buy Harpoon II Extended Range anti-ship missiles and Evolved Seasparrow shipboard anti-aircraft missiles.

Or as the naval blog put it, “diversifying the anti-ship missiles of the western countries around the Baltic Sea is also a good thing, as this makes it harder for the [Russian] Baltic Fleet to optimize countermeasures.”

Which brings up a thornier issue: how will Russia react to the Israeli sale? Jerusalem and Moscow are in a delicate dance right now, with Russia seeking to keep Israel from intervening in the Syrian conflict, and Israel trying to persuade Russia to keep Iran and Hezbollah from entrenching along the Israel-Syria border. With Finland making noises about joining NATO, and Finnish missiles most likely to be used against Russia, it seems an odd time for Israel to be selling weapons to Finland.