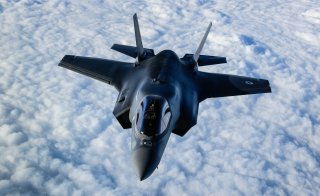 It was just a couple of weeks ago when a British F-35B Lightning II stealth fighter jet crashed into the Mediterranean while taking off from the Royal Navy aircraft carrier HMS Queen Elizabeth.

In light of this news, Western allies are now hoping that the wreckage of the aircraft will be recovered before Russian submarines get to it and potentially lose critical cutting-edge technological know-how regarding the fifth-generation fighter.

Per the EurAsian Times, U.S. Brigadier-General Simon Doran was quoted as saying that “we’re not worried because we are working through the issue at the moment. There was obviously a concern when the plane went down. The pilot is safe, which is the most important thing.”

However, he and other officials declined to divulge any further details regarding the recovery efforts.

The newspaper added that “the UK is currently in possession of twenty-one U.S.-made F-35Bs. These are mostly slated for use on the country’s two modern aircraft carriers—HMS Queen Elizabeth, and HMS Prince of Wales. The F-35Bs, a variant of the F-35, are designed for short take-off and vertical landing (STOVL).”

Any Tech to Glean?

The F-35 is an amazing fighter jet but per the Aviation Geek Club, airpower analyst Miguel Miranda noted that “nothing really (will be gleaned) as the Russians have the same tech. An F-35B was lost? The Russians certainly know what an F-35B can do.”

“There’s no credible indication that Russian subs are racing towards the F-35’s Mediterranean underwater grave, but NATO’s claims that it supposedly is could revive the past years’ hysteria about Russian submarines and the alleged threat they pose,” Moscow-based American political analyst Andrew Korybko said.

This particular incident also brings to mind when the Soviets tried to get to an F-14 Tomcat that fell off the USS John F. Kennedy in September 1976.

“At the time, the John F. Kennedy was off Scapa Flow (in Scotland’s northern islands) … which wasn’t too far from the Soviet backyard, and this gave them plausible cover to attempt a recovery of the aircraft by posing as a fishing fleet conducting normal fishing operations,” aviation expert Aaron Outram wrote on Quora.

“However, by the end of their operations in the area, the Soviet interlopers were unsuccessful—and they went back to Russian waters empty-handed. Once all the Ruskie hubbub calmed down, the U.S. Navy sent in their ace-in-the-hole: Admiral Rickover’s science toy, the NR-1… which was a nuclear research submarine suited to these kinds of mission. Being nuclear powered, the NR-1 . . . allowed the crew ample time to zero in on the F-14 and inspect what, if anything, the Soviets had accomplished,” he added.

Eventually, the aircraft’s “wreckage was located . . . and the NR-1 crew observed that it had indeed been thoroughly harassed by Soviet efforts—with the fuselage roughed up quite a bit and entangled in fishing nets that had no business being there.”