Will Sessions Go For His Old Senate Seat? 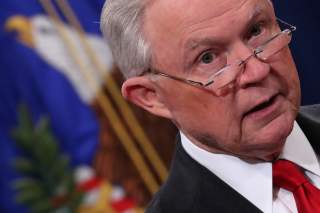 Former Attorney General Jeff Sessions is reportedly considering a run for his old Alabama Senate seat, according to three Republicans familiar with the matter.

The former Republican Alabama senator made phone calls discussing a potential campaign, the sources told The Associated Press in a report published Monday.

“We are hearing that Sessions is seriously considering running for Senate again and that polling indicates he would be in very good shape. The Club for Growth has in the past and would once again encourage him to run for that Senate seat,” conservative PAC Club for Growth president David McIntosh told Politico.

Jeff Sessions is strongly considering the race for his old Senate seat in Alabama.

He’d scramble the crowded field of Republicans seeking to take on Democratic Sen. Doug Jones, who’s widely viewed as the most vulnerable senator on the ballot next year https://t.co/0gHbMktJio

“We were enthusiastic way back early on that Sessions, when he retired from the attorney general spot, might go back to the Senate,” McIntosh continued. “At that point, he didn’t want to think about that because he was just finishing up one job. I’m very encouraged he’s now seriously considering it.”

Alabama Republican Sen. Richard Shelby said President Donald Trump was not keen on the idea of Sessions running for Alabama Senate when they discussed the possibility in July.

“I did talk to [Sessions]. I talked to the president about it, too … about if Sessions ran. He was not encouraging,” Shelby told The Hill. “How do I say it? [Trump] was not on board, OK?”

The president fired Sessions on Nov. 7, 2018, after he appointed the former Alabama senator to be his first attorney general. The president’s decision came after Sessions recused himself from the Russia investigation.

Trump thanked Sessions in a Nov. 7 Twitter post, writing, “We thank Attorney General Jeff Sessions for his service, and wish him well! A permanent replacement will be nominated at a later date.”