Will the SHOT Show Go On? 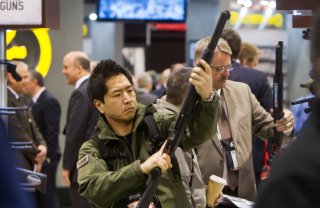 The surge of the Omicron variant of the novel coronavirus could derail the 2022 SHOT Show, which was set to return after last year's event was canceled. SHOT (Shooting, Hunting, Outdoor Trade) Show is the largest firearms industry event in the world, attracting firearm manufacturers, retailers, and media. It is currently scheduled to be held from January 18 to 21 at the Venetian Expo Center in Las Vegas.

SHOT Show, which began in 1979 when it was held in St. Louis, is organized by the National Shooting Sports Foundation (NSSF). Over the years, it has been held in such diverse cities as San Francisco, Dallas, Atlanta, and Orlando. Since 2010, it has been held annually in January in Las Vegas and is contracted to remain in Sin City until at least 2027. The trade show, which is not open to the general public, still attracts some 60,000 attendees annually to its 630,000 square feet of exhibition space, making it among the top 25 trade shows in the country.

Due to the pandemic, the 2021 event was canceled and it remains unclear if the 2022 show will go on.

As the National Rifle Asociation's (NRA) Shooting Illustrated reported last week, the firearms industry may be closely watching the consumer electronics world as the International CES (formerly known as the Consumer Electronics Show), which is the world's largest trade show and is scheduled to take place in Vegas beginning on Wednesday, announced that it will close a day early due to the Omicron surge.

Already, several high profile companies, including Microsoft, Google, Intel, Meta (formerly Facebook), Twitter, GM, Lenovo, BMW, AMD, T-Mobile, Pinterest, and Amazon, among others, have announced that they would not have a floor presence at the massive trade show.

As a result, CES is expected to be a scaled back event, with just 50,000 attendees and some 2,200 exhibitors expected to attend. However, even with a reduced format, Consumer Technology Association (CTA) President Gary Shapiro has vowed, the 2022 show "will and must go on" after the 2021 was only held virtually.

Attendees will have to show proof of vaccination to receive their badges, while the CTA has requested that those attending be tested for Covid-19 less than 24 hours before entering the conference. Masks will also be required for the show, and international travelers will get a free PCR test after the show ends.

This may be necessary as the 2020 event may have been a "super spreader" event in the early days of the pandemic as it brought in some 180,000 attendees from around the world—including China.

SHOT in the Dark?

Currently, CES has far more stringent health mandates than SHOT, and while both will require that masks be worn per state mandates, SHOT Show isn't requiring proof of vaccination or negative testing—at least not yet.

To date, Sig Sauer is also the only major firearms maker to pull out of the show, and it made its decision back in October.

"Our number one priority throughout the pandemic has been, and will remain, our employees," Sig Sauer said in a statement. "Sig Sauer has an extremely large presence at SHOT Show sending over 140 employees to the show and our pre-show Range Day event. Maintaining this presence, or even a scaled-back minimum presence for 2022, represents a significant health risk to all 2,600 of our employees across our 13 U.S. locations, as individuals attending the show return to our facilities and risk continued exposure to our entire employee base."

With just two weeks until the start of SHOT Show it is unclear if the event will be scaled back, or institute further restrictions. We'll continue to monitor the story as it develops.