Will a Sixth-Generation Fighter Replace the Navy’s F/A-18 Super Hornet? 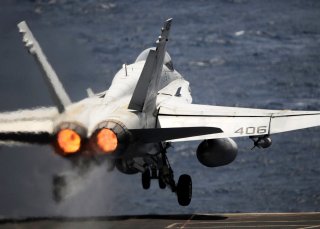 Air Force sixth-generation aircraft have already taken to the sky, raising the prospect that there may be new innovations in the areas of stealth, weaponry, and sensor technology sufficient to inspire a move to fast-track a new generation of fighter jets.

While very little is known about the now airborne sixth-generation aircraft, there is now new evidence that the program is showing great promise, given that Navy leaders are saying its F/A-XX F/A-18 replacement may indeed be part of a family of new sixth-generation platforms.

“As we look at it right now, the Next-Gen Air Dominance is a family of systems, which has as its centerpiece the F/A-XX—which may or may not be manned—platform. It’s the fixed-wing portion of the Next-Gen Air Dominance family of systems,” Rear Adm. Gregory Harris, who leads the Chief of Naval Operations Air War developmental unit, said at a Navy League breakfast, according to an interesting report by the U.S. Naval Institute.

Harris also unambiguously said that the now fast-emerging Next-Generation Air Dominance (NGAD) effort will likely be “more than just a single aircraft,” indicating it is expected to incorporate manned and unmanned technology. Perhaps NGAD could include a F/A-18 Super Hornet replacement as well as a new supplement to existing fifth-generation fighters and even networked, stealthy surveillance drones. It would make sense if part of the rationale were to expedite and enable multi-domain networking given current Pentagon work on Joint All Domain Command and Control technologies.

Interwoven and similarly architected Naval and Air sixth-generation aircraft might massively accelerate multi-domain operational connectivity, particularly if they were engineered with common data links and analogous technical standards while still remaining distinctly tailored to their respective missions. Maybe sixth-generation technology could even incorporate the emergence of some kind of carrier-launched stealthy attack drone, perhaps some kind of sixth-generation X-47B-like platform.

Certainly, on the Naval front, some might contend that a F/A-18 replacement of some kind is long overdue, despite the successful series of upgrades to the aircraft and decades-long Service Life Extension Program which did manage to extend the plane’s flight operations by several thousand combat hours. Perhaps some kind of carrier-launched, sixth-generation F-22-like Naval strike jet could complement and fly alongside the F-35C stealth fighter, bringing breakthrough levels of speed, air-to-air maneuverability, and weapons attack options?

That certainly appears to be the Air Force’s intent, meaning that the service plans to extend, improve, and upgrade the F-35 as a stealth multi-role fighter, while adding new sixth-generation fighter jet technology to the equation to operate in coordination with fifth-generation platforms. This kind of multi-platform interoperability is already underway through Air Force programs that will enable two-way LINK 16 data connectivity between F-22s and F-35s fighter jets. Creating a mesh-like web of networking stealth platforms able to share targeting information, navigational detail, threat data, and even drone video feeds in real-time certainly presents what could be described as paradigm-changing warfare technology.