Will Tajikistan Join the Panjshir Valley's Fight Against the Taliban? 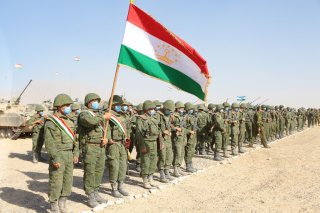 Tajikistan shares an 843-mile long border with Afghanistan that traces along the Amu Darya, Pyanj, and Pamir rivers in the West and ends at a shared border with China in the mountainous Wakhan Corridor. Still, recent events show the connection between Tajikistan and Afghanistan runs deeper than just geographical proximity, as the two countries have become increasingly intertwined with one another.

Though the flight of President Ashraf Ghani, the Taliban’s assumption of power, and the withdrawal of U.S. troops and their allies from Afghanistan suggest the Taliban’s takeover is complete, one region still poses challenges to the Taliban’s accession to power: the Panjshir Valley. Located north of Kabul and West of the Hindu Kush mountain range, Panjshir is resisting the Taliban’s demands and refusing to accept their terms of surrender. A militia leading the resistance against the Taliban’s encroachment in the Panjshir Valley consists not only of local fighters and remnants of the Afghan military but also Tajik citizens who have crossed the border to join the struggle. This cross-borders solidarity underscores the intertwined relations that exist on the local level between communities in northern Afghanistan and southern Tajikistan.

The Panjshir Valley, although located in Afghanistan, is an ethnically diverse region that is home to a large population of ethnic Tajiks. In fact, twenty-five percent of Afghans are ethnically Tajik. This ethnic connection has spurred support from parts of Tajik society that want to aid their ethnic kin living across the border. A recent open letter addressed to President Emomali Rahmon of Tajikistan from a group of townspeople from Kulob, Tajikistan, a southern Tajikistani town about thirty miles from the border with Afghanistan, requested permission to join the anti-Taliban militia forces fighting in the Panjshir Valley. According to their social media pages, this Tajikistan-based group has 1,800 men looking to pick up the mantle and fight alongside the anti-Taliban militia in Afghanistan.

For some, the motivation to fight in the Panjshir Valley is based on a feeling of indebtedness. During the 1990s, as the Tajik Civil War raged, Afghanistan not only accepted approximately half a million refugees but also allowed the United Tajik Opposition (UTO) forces, the coalition of democratic, Islamic, and local ethnic resistance groups, to flee into Afghanistan. Indeed, many of the UTO commanders had their bases of operation in northern Afghanistan. This aid provided by northern Afghans during the Tajik Civil War has contributed to the sympathies felt by ethnic Tajiks to the plight of the people living in the Panjshir Valley.

Although the open letter has garnered support from some ethnic Tajiks to rush across the border and aid anti-Taliban forces, Tajikistani officials do not follow the same line of rhetoric. Instead, most officials are taking a hardline approach that emphasizes the importance of following international law in all matters pertaining to the unfolding events in Afghanistan. Tajikistani officials, when asked about the open letter and the volunteers who intend to go fight, never fail to mention that it is a crime for citizens of Tajikistan to cross the border and fight in Afghanistan. Officials stress that the only way Tajikistani citizens will legally be allowed to fight is if the Afghan government officially asks Tajikistan to send troops to the Panjshir Valley.

The Tajikistani government may disapprove of the methods that some of its citizens have decided to use to show their disapproval of the Taliban’s takeover in Afghanistan. However, this does not imply that it condones the Taliban. President Rahmon stated that Tajikistan would not recognize a Taliban government that does not include representatives from minority groups, drawing specific attention to Afghanistan’s Tajik population. The Taliban has attempted to quell the worries of Tajikistan and the other Central Asian countries that border Afghanistan–Uzbekistan and Turkmenistan–by stating that the Taliban has no intent to allow for cross-border conflict as a result of its return to power.

The government of Tajikistan and the Taliban both state that they intend to stay on their respective sides of the border, despite history and ethnic ties suggesting otherwise. Tajikistan has been thrust into the limelight of international affairs and is now faced with the difficult decision of how to play its cards. The citizens of Tajikistan, the swaths of refugees waiting at the southern border of Tajikistan, and the international community all have the power to force Tajikistan’s hand, and all three of these groups want Tajikistan to play a large and active role in the unfolding story of the Taliban’s takeover of Afghanistan.

Elizabeth Lewis is a program assistant at the Center for the National Interest.