Will Ted Cruz Run for President in 2024? 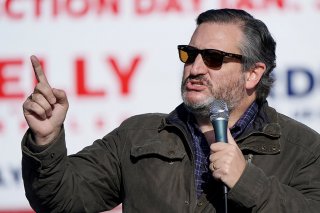 Nearly a dozen Republican lawmakers are leaping to catch a 2024 White House bid in a jumbled party that’s torn over whether to prop up former President Donald Trump’s mantle or carve a new path. But one GOP prospect has a particular familiarity with the presidential playing field, as he took a crack at the top spot in 2016.

Sen. Ted Cruz (R-Texas), who failed to grapple the Republican nomination five years ago and often collided with the former president on the campaign trail, is among several conservatives expected to launch a presidential campaign, as he’s coined the reputation for being a frontrunner in Trump’s party fabric, bolstering election fraud claims and rejecting President Joe Biden’s agenda.

A Cruz 2024 run would likely be similar to his initial run, while also trying to garner support from the former president’s voter base—a measure that seems to already be tackled since pro-Trump rioters storming the U.S. Capitol on Jan. 6 said in a video that “Cruz would want us to do this” and that the Texan senator is on their side.

“There is little question that Cruz is trying to position himself for a 2024 presidential run. Cruz had positioned himself pretty well as a ‘Republican outsider’ for 2016 but didn't anticipate someone even further outside challenging the field,” Kirby Goidel, a political science professor at Texas A&M University, said. “Without Trump in 2016, Cruz would have had a much better shot at the nomination.”

Goidel added, “He is strategically ambitious but he also has to sense that conditions are right and that he has set himself for the run. What every potential nominee should be doing right now is setting up a possible run. They can decide later if the conditions aren't right or 2024 isn't the best time.”

Experts have suggested that the Republican lawmakers considering a 2024 presidential run are taking the wait-and-see approach to monitor Trump’s moves over the next few months. The former president has hinted of another run for the commander-in-chief spot, a nomination he’d likely get as Trump is the powerhouse of the party.

Since Biden took office, Cruz has seized the opportunity to blast the president’s far-Left executive actions, as well as his push to reverse many Trump-related policies, as Cruz targeted blue-collar workers last month through a campaign that condemned the president’s decision to re-enter the Paris climate accord, tweeting, “Paris or Pittsburgh?” He then started advertising that he’ll send email subscribers “Pittsburgh > Paris” bumper stickers.

The two-term Republican has also voted against four of Biden’s Cabinet nominees, a behavior that other potential 2024 White House candidates have exercised as GOP Sens. Josh Hawley (Mo.), Tom Cotton (Ark.), Rick Scott (Fla.) and Rand Paul (Ky.) have rejected at least four cabinet nominations—all of which are Republican presidential prospects. Cruz was also a leading voice in denying the certification of the 2020 Electoral College vote, boasting baseless claims of voter fraud and emphasizing Trump’s rhetoric.

More recently, Cruz proposed a spate of amendments that were covered during the Senate’s all-night voting session. The Texan offered an amendment establishing a point of order against legislation that would boost government funding to increase the number of justices on the Supreme Court. He also filed amendments to review what he refers to as “improper and fraudulent” unemployment payments made by California.

“It's important to remember that politicians, mostly, are created—they don't chart an independent course,” Scott de Marchi, a political science professor at Duke University, said. “Cruz is the expression of a lot of Americans who are angry, feel disenfranchised, and feel looked down on by elites.”

And while Cruz has received loads of backlash for his involvement in inciting the Capitol assault and hesitancy to condemn the rioters—with lawmakers calling for his resignation and pushing to revoke his license to practice law—political scientists are not “convinced” that his behavior would have a major impact on a future campaign.

“I'm not yet convinced that his hesitancy to condemn the riots is a net negative for him at this juncture,” Jacob Neiheisel, associate professor of political science at the University of Buffalo, said, citing a recent poll that revealed that nearly half of Republican participants described the Capitol attack as “defending freedom.”

Neiheisel added, “Without a significant shift in the GOP base, I don't think that his hesitancy to condemn the riots is going to hurt him a great deal. The current ambivalence that Republican identifiers exhibit in their reactions to the riots, coupled with the fact that most people have a fairly short memory when it comes to political events, makes it unlikely that his recent actions, or inaction, are going to be disqualifying factors when it comes to seeking the Republican nomination for president.”

Cruz’s association with the riots sparked uproar with his former aides and campaign advisers, with many of them saying they would never help him for reelection again. His chief spokeswoman, Lauren Blair Bianchi, resigned following the assault on the Capitol, arguing that she could no longer defend the senator.

Goidel, however, noted that one of the biggest challenges for Cruz in an upcoming presidential election would be regarding how to energize Trump voters while also appealing to a more traditional base of the party.

“The challenge, I think, he may end up in the same place as a lot of the Republican candidates in 2016. There was a lot of talent in that field, but they also looked and sounded like cookie-cutter Republicans,” Goidel said. “Trump was able to emerge at least in part because he was different, less predictable, and more authentic. Cruz has to balance appealing to Trump and his base voters against the appearance that he is little more than ambition in search of a rationale for his candidacy.”

Goidel added that “candidates too often run based on what happened in the last campaign, especially candidates like Cruz, and that often they misapply the lessons. What this means is that I think you'll see a number of candidates trying to appeal to the Trump base but not understanding that at least part of his appeal was how different he was, and how uncalculated his decisions seem to be. So what happens if Cruz, Hawley, Rubio, and others all try to run the same race? Then throw in a Tucker Carlson, Ivanka or Don Jr, or some other ‘outsider’ candidate?”

Cruz will likely bump into this hurdle if he decides to run for president in 2024, since the GOP shortlist of candidates is rather long, with candidates shoving each other aside to take control of the disrupted party in a post-Trump era.