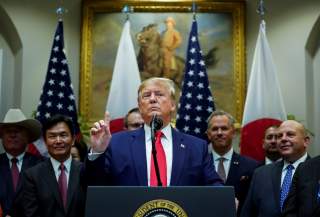 President Donald Trump tweeted Monday that if Turkey does anything that is considered “to be off limits,” he “will totally destroy and obliterate” the country’s economy.

The White House announced Sunday evening that Trump told Turkish President Recep Tayyip Erdogan that the U.S. would clear out of northern Syria so that Erdogan could invade. Trump tweeted Monday that the U.S. military could “always go back & BLAST” if necessary.

“As I have stated strongly before, and just to reiterate, if Turkey does anything that I, in my great and unmatched wisdom, consider to be off limits, I will totally destroy and obliterate the Economy of Turkey (I’ve done before!),” Trump tweeted, referencing Turkish tariffs implemented in 2018.

Trump wrote that “the U.S. has done far more than anyone could have ever expected” and suggested it was time “for others in the region … to protect their own territory.”

….the captured ISIS fighters and families. The U.S. has done far more than anyone could have ever expected, including the capture of 100% of the ISIS Caliphate. It is time now for others in the region, some of great wealth, to protect their own territory. THE USA IS GREAT!

“The endless and ridiculous wars are ENDING!” Trump wrote in another tweet.

The White House announced Sunday that Turkey would soon launch a military operation in northern Syria, adding that U.S. troops wouldn’t be “in the immediate area.” The U.S. had over 1,000 troops deployed in northern Syria, The Hill reported.

Republican lawmakers have pushed back on the decision to withdraw. South Carolina GOP Sen. Lindsey Graham called the news a “disaster in the making” and Utah GOP Sen. Mitt Romney called it a “betrayal,” according to The Hill.