Will Two U.S. Navy Vessels Need to Be Renamed? 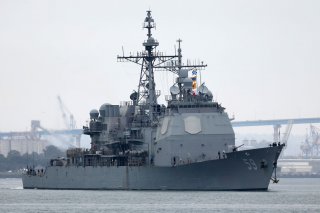 In a move some say is overdue; the U.S. Navy this month announced a complete ban on the Confederate battle flag from all public spaces and work areas on Navy bases, ships, submarines and aircraft.

“The order is meant to ensure unit cohesion, preserve good order and discipline, and uphold the Navy’s core values of honor, courage and commitment,” a spokesman for Chief of Naval Operations Adm. Mike Gilday said in an email last week to Navy Times.

The move comes as the Pentagon and Congress have launched new efforts to stamp out Confederate iconography in the U.S. military—which some have argued is just part of a southern tradition. The Atlantic reported, “When white southern troops went overseas during the (Second World War), some of them carried Confederate flags with them… The white troops who raised the Confederate flag during World War II argued that they were honoring the military service of their forefathers.”

The times have clearly changed, and the bipartisan language in the Senate’s version of the National Defense Authorization Act, which was outlined last week by the Senate Armed Services Committee, has called for the creation of a new committee that “would remove all names, symbols, displays, monuments, and paraphernalia that honor or commemorate the Confederacy and anyone who voluntarily served it from bases and other property of the U.S. military.”

While the focus has been on U.S. Army bases that were named for Confederate military leaders, where the issue gets a bit trickier is in the fact that two Navy warships have names that are also tied to Confederacy. These include the Ticonderoga-class guided-missile cruiser USS Chancerllorsville (CG-62) and the oceanographic survey ship USNS Maury (T-AGS-66).

In the case of the latter, the ship is named for Matthew Fontaine Maury who did serve in the Navy of the Confederate States (CSN) during the Civil War. However, he actually spent the majority of his time in Europe lobbying for support for the Confederacy. Maury, who had suffered a leg injury as a midshipman that left him unfit for duty aboard the USS Brandywine, devoted himself full-time to the study of navigation, meteorology, the winds and currents.

Maury published his findings, continued his studies, and was appointed U.S. Naval Superintendent of the Depot of Charts and Instruments in 1842. It was in that capacity that he published The Physical Geography of the Sea, which is considered the first modern textbook of oceanography. His system of recording oceanographic data was subsequently adopted by seafaring nations around the world. After the Civil War he served as professor of meteorology at the Virginia Military Institute up until his death in 1872.

The warship named in his honor, T-AGS 66, is the Navy’s seventh Pathfinder-class ship, completed its first operational oceanographic survey in November 2017. It was the first in the class to be fitted with a 300 square foot moon pool, which enables it to launch and retrieve unmanned underwater vehicles (UUVs). The Maury was described at the time by Oceanographer of the Navy and Commander, Naval Meteorology and Oceanography Command Rear Adm. John Okon as “the world’s premier survey ship.”

The issue of the USS Chancerllorsville (CG-62), which was commissioned in 1989, is even trickier. All Ticonderoga-class cruisers are named for American battles, and it isn’t the only one to be named for a battle from the Civil War. However, unlike the USS Mobile Bay (CG-53) or USS Vicksburg (CG-69), the Chancellorsville is named for what was a clear Confederate victory. Moreover, the hull of the cruiser reportedly contains minié balls and shell fragments from the battle, and its wardroom also had a painting feature portraying General Robert E. Lee and General Thomas Jonathan “Stonewall” Jackson—who was killed at the battle.

Even the ship’s crest has been described as honoring Lee and Jackson—despite the fact as it is blue and gray to denote the war that pitted brother against brother. It features an inverted wreath that commemorates Jackson’s death and features the ship’s motto, “Press on,” which is what Jackson reportedly told his troops when in pursuit of the Union forces.

However, Secretary of the Navy Kenneth Braithwaite has said that the name of the cruiser shouldn’t be an issue. “The Navy also has ships named after battles we lost during the Second World War as well. So not so much a reflection on that as it is the history of our country. We can’t rewrite the history per se, but those things that divide us are things that we need to revisit and rethink,” he told USNI News.

It is true that other Ticonderoga-class cruisers have been named for other controversial and even indecisive battles but no outright U.S. military defeats—and this includes the USS Bunker Hill (CG-52), named for what was essentially a minor British victory in the American Revolution; USS Chosin, named for a Korean War battle where both sides have claimed victory; and USS Anzio, named for the World War II battle that was a costly Allied victory.

During World War II, the U.S. Navy did launch the Casablanca-class escort carrier USS Wake Island (CVE-65), named for the battle that took place on the Wake Island atoll in the South Pacific at the start of war. While an American defeat, the hold out of the U.S. marines and sailors proved to be a show of determination in the early stages of the war. The carrier named for that battle saw action in the Philippines, Iwo Jima and Okinawa and earned three battle stars.