Will Unions Drive the Job Market Into the Ground With a New Bill? 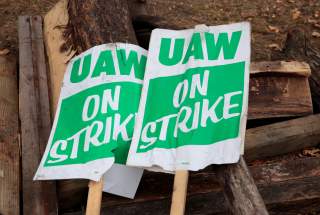 Despite its congenial acronym, a bill the House of Representatives is about to pass would upend the U.S. labor market as we know it.

The Protecting the Right to Organize Act—dubbed the PRO Act—comes at a time when the labor market is stronger than it has been in decades.

Unemployment is at a 50-year low. Wage growth is incredibly strong, with the lowest-wage earners experiencing twice the average gains. The number of discouraged workers plummeted more than 25% over the past year as favorable work opportunities opened up for them.

The PRO Act threatens all of those gains at the expense of benefiting union bosses who send hundreds of millions of dollars to liberal causes and politicians each year.

Under the PRO Act, workers would lose—not gain—protections and basic democratic rights, along with a chunk of their paychecks. Among its many other troubling provisions, the PRO Act would also put independent workers’ livelihoods on the line, intervene in employers’ business decisions, and overturn 27 sovereignly enacted state right-to-work laws.

Here are just a few of the PRO Act’s harmful provisions:

One of the reasons unions are in decline in the U.S. is because they haven’t adapted to the changing labor market and economy.

Many of the benefits of unions in the past—such as securing safe working conditions and fair wages—have become less relevant as both the law and the globally competitive economy have produced the things unions used to achieve.

Instead of trying to force workers into unions that don’t provide value to them, unions should be responding by providing services that workers want so that they will join voluntarily.

The Freelancers Union, for example, has done just that by helping freelancers pool together for lower-cost benefits, such as health and disability insurance. And it does it without requiring any dues from members.

Whereas the PRO Act would set workers and the economy back by forcing 20th-century structures onto a 21st-century workplace, policymakers can help workers adapt to, and benefit from, changes in technology and the nature of work by expanding on the recent pro-growth policies that have generated a strong economy and competitive labor market; allowing the private sector to respond to workers’ demands; allowing options other than traditional employment for individuals to earn a living or to supplement their income; and by making it easier for nontraditional workers to access traditional workplace benefits.

This article first appeared in The Daily Signal on February 5, 2019. It was corrected before appearing in The National Interest to eliminate the previous statement that the PRO Act would overturn the Supreme Court’s Janus v. AFSCME decision. This is not the case because the PRO Act would only apply to private sector workers.