Will the U.S. Navy's Columbia Missile Submarine Program Get Delayed? 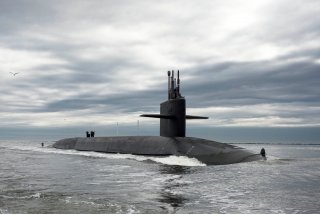 According to a new report from the Government Accountability Office (GAO), the U.S. Navy may need to have a back-up plan in place should the service be unable to take timely acquisition of the new Columbia-class ballistic missile submarines. The U.S. Navy has planned to construct twelve of the new class of submarines – with a total cost of $115 billion – and these would replace the aging Ohio-class submarines from 2027 to 2031.

The GAO had previously expressed concerns a year ago that the Navy's timeline was optimistic, notably in regard to the labor hours that would be needed for the construction of the new submarines. According to a GAO report from April 2019, "While the Navy analyzed cost risks, it did not include a margin in its estimate for likely cost overruns. The Navy told us it will continue to update its lead submarine cost estimate, but an independent assessment of the estimate may not be complete in time to inform the Navy's 2021 budget request to Congress to purchase the lead submarine. Without these reviews, the cost estimate—and, consequently, the budget—may be unrealistic."

Now a year later, the question is being asked whether there is truly a "plan B" should the Columbia-class program face delays. However, last week USN leadership said it remains optimistic about the timeline for the program, even as it is seeing what it can do to sustain the Ohio-class SSBN patrols.

According to a Congressional Research Service report from November 22 of last year, "Navy Columbia (SSBN-826) Class Ballistic Missile Submarine Program: Background and Issues for Congress," the Navy has repeatedly reaffirmed that the new class of submarines remains a top priority. However, the report to Congress identified that issues still remain including the risk of cost growth and the potential impact of the program's funding will have on other Navy programs.

One major issue that the Navy faces is that the potential industrial-base challenges that could come with building both the Columbia­-class boats and the new Virginia-class attack submarines (SSNs) at the same time.

The most recent Congressional Research Service updated on the status of the program – updated March 22, 2020 – also noted that the risk of COVID-19 could result in other technical challenges and/or funding-related issues, which could impact the designing and building of the lead Columba-class boat. That could put the Navy at risk to have the submarines ready for its first scheduled deterrent patrol in 2031, when it is to deploy in place of the aging Ohio-class.

The Columbia-class submarines are currently being constructed by General Dynamic subsidiary Electric Boat in collaboration with Newport News Shipbuilding. The first steel plate for the lead in class was cut on May 2019 with a plan for it to enter service in 2027. The new submarines were designed to support the U.S. strategic deterrent mission and the SSBN fleet carries 70 percent of the nation's operational nuclear weapons.