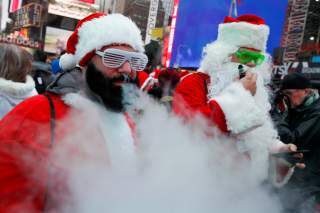 For over six months US health agencies have warned of the dangers of vaping e-cigarettes. According to one leading expert, the CDC (and to a lesser extent the FDA) has misled the public into thinking vaping e-cigarettes was leading to deaths from lung disease when the real cause was cannabis vaping (one example here, but there are many on this site).

The reason for the misleading rhetoric is the concern about youth vaping. And while no parent wants their kid to vape, it is a lot safer than smoking. As Britain’s Royal Society of Public Health explains with some exasperation, vaping nicotine is no more dangerous than caffeine. It is when tobacco is smoked that the real risks of cancer and heart disease arise, not from the nicotine it contains.

Vaping might be a gateway to smoking and so there are reasons to be concerned about youth vaping in this regard. But kids smoke traditional cigarettes too and the accumulated evidence on vaping show that e-cigarettes are far safer than traditional smoking and can help smokers quit. And while vaping has gone up, Brad Rodu shows that the real number of kids routinely vaping who do not smoke is under 100,000, which is not remotely close to an epidemic.

While the CDC finally admitted that they had been incorrect about the dangers of e-cigarettes, the damage was done, with states such as Massachusetts banning all types of vaping products and possibly seeing increases in traditional smoking.

As a recent paper by Michelle Minton put it:

“The CDC’s reversal has done little to abate the calls for prohibitionist policies, such as the FDA’s recent ban on flavored e-cigarettes, which was promoted by misinformation about the outbreak. Furthermore, as a result of their efforts to stoke unwarranted fears about the risks of e-cigarettes, these agencies, which are supposedly responsible for protecting the health and well-being of Americans, are scaring adult smokers away from products that could help them quit smoking and may even be driving some back to smoke combustible cigarettes, which contribute to nearly half a million deaths in the U.S. every year.”

Over the next few months, we will see if smoking rates tick back up after declining rapidly, partly due to the rise in vaping. Health agencies that mislead, even if well-intentioned, might drive people back to smoking.