Will Venezuela's Maduro Give up Power for Coronavirus Sanctions Relief? 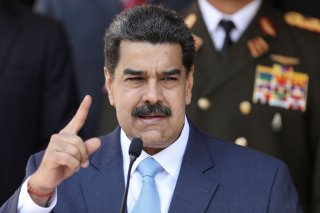 To break Venezuela’s ongoing political stalemate, U.S. Secretary of State Mike Pompeo announced a plan on March 31 that outlines a path to a power-sharing framework and free elections in exchange for the potential removal of U.S. sanctions. Dubbed the "Democratic Transition Framework," the proposal specifically calls for both President Nicolas Maduro and U.S.-backed opposition leader Juan Guaido to step aside for the formation of a new “inclusive transitional government acceptable to the major factions” without either leader. Elected by the country’s opposition-controlled National Assembly, this transitional government would remain in power until it oversees free elections, ideally held in six to 12 months.

To put the plan into motion, the United States has offered the quick removal of sanctions on individuals who resign from their posts within the Maduro regime. The removal of broader U.S. sanctions on Venezuela’s oil industry and state-owned energy company Petroleos de Venezuela (PDVSA), however, are contingent on Maduro himself leaving office, as well as the withdrawal of all Cuban and Russian forces currently deployed in the country. In a separate statement, the U.S. Special Representative for Venezuela, Elliot Abrams, notably added that the proposal does not have a mechanism to reject the U.S. Department of Justice’s recently announced indictment of Maduro and other Venezuelan officials over so-called "narco-terrorism" charges.

The fact that the new proposal is less overtly Guido-centeric marks a notable shift in tone for the United States, and could indicate that Washington has concluded that its former hardline rhetoric against the Maduro regime has failed to quickly oust the leader from office as intended. But the core of the White House’s strategy in Venezuela is still the same — that is, driving a wedge between Maduro and his loyalists in both the United Socialist Party and the military so that they eventually turn on the leader in some fashion. The U.S.-led push to oust Maduro was always going to inherently require a transitional government; this plan just formally plots the course to reach that end.

However, Washington’s move to indict a number of Maduro’s allies less than a week ago — and that the newly proposed transition plan does not include dropping those charges — could backfire on this goal by hardening solidarity among the regime’s top indicted officials who now all find themselves in the same boat. It will thus be critical to monitor whether non-indicted officials begin to come out against Maduro in response to the new U.S. plan, and if those who do have enough political sway to encourage other officials to follow suit.

There’s also a chance Maduro would still be eligible to run in the new elections: While Pompeo stressed Maduro would "never again" rule Venezuela in his statement, Abrams also noted that he could "theoretically run." Indeed, there is significant concern among Venezuela hawks in the United States that the new proposal could effectively pull the rug out from Guaido’s feet, and it remains unclear whether there's a different opposition figure who could replace him to challenge Maduro.

The U.S. offer for a transition will entice some non-indicted officials to turn against Maduro, but those pathways have always been there. So far this year, Maduro’s security forces also have continued to successfully block attempts by Guaido’s opposition movement to access the National Assembly building. Stratfor thus maintains its assessment that Maduro’s government will remain in power through the end of 2020, despite the mounting financial strain brought on by U.S. sanctions, the collapse in oil production and now coronavirus-related drops in global oil prices and demand. The more likely timetable for those fissures to metastasize into pushing out Maduro is 2021 or 2022, with the long-term health of Venezuela’s oil industry and oil prices still the most important force that could eventually result in a government transition.

In Venezuela, the U.S. Offers Sanctions Relief for a Power-Sharing Deal is republished with the permission of Stratfor Worldview, a geopolitical intelligence and advisory firm.