Winning Edge: Meet the Forgotten Board Game Used by the U.S. Army 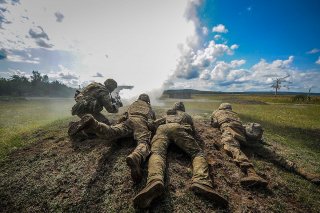 Sometime in the late 1970s or early 1980s, the United States Army produced "The Winning Edge," a board game that mixed question-and-answer trivia with mathematical targeting. While certainly not up to the level of "Trivial Pursuit" or "Monopoly," it did include a colorful game board, 12 decks of question cards and six plastic cannon playing pieces as well as scoring pins and dice.

It was designed for two to six players and teams, and the goal was to help train artillery officers. The categories of questions included MOS/Specialty, NBC, Fieldcraft, Crew Served Weapons, and Uniforms; and players/teams had to compete in such operations as FFE (Fire For Effect) missions or TOT (Time On Target) missions by answering questions when on specific spaces of the board.

"The Winning Edge" has largely been forgotten even among hardcore board game fans, although copies do show up on eBay from time to time. However, it highlights how such games have long been used by military planners as a training tool.

"The military has been using games for training, tactics analysis and mission preparation for centuries. Each generation has had to wrestle with the personal and public image of a game being used for something as serious as planning warfare in which people's lives are at stake," wrote Roger Smith, U.S. Army PEO for Simulation, Training, and Instrumentation, in a white paper titled "Simulation & Gaming, 40th anniversary issue."

Smith noted as far back the Roman Empire, commanders used sand tables and abstract icons to represent soldiers and units in battle – and this was among the earliest ways leaders could visualize an engagement before it happened. In the centuries since, military thinkers have played games such as Chess and Go, while in the 19th century the United States Naval War College used wargames to plan U.S. defenses against a theorized British naval invasion of New York harbor.

While "The Winning Edge" doesn't score points in design aesthetics, the point wasn't to be a visual masterpiece. It should be remembered too that wargames of that era were heavy on tables, charts and statistics rather than visuals.

In fact, it came at a time when military wargames weren't exactly new, but yet were still fairly complex in nature. Smith noted in his paper how the RAND Corporation was developing strategic simulations in the 1950s, and at the same time Charles Robert – who was awaiting his commission in the U.S. Army – created a game to hone his tactical skills. That game was called "Tactics," and Roberts went on to found a board game company known as Avalon Hill (now owned by Hasbro), where he released a commercial version as "Tactics II" in 1958.

Military themed board games have come a long way, and now focus on visually rich games with colorful map boards, wooden or plastic pieces and decks of cards with robust artwork that help immerse the player.

As a training aid such niceties were probably considered unnecessary, but in recent years it seems that even those games being used by military planners are far more colorful. As The Economist reported in 2014, a group of defense and intelligence officials – members of the Strategic Discussion Group – gather to play board games such as "Persian Incursion." That particular title explores the political and military effects of an Israeli campaign against Iran.

While computer simulations are also used, board games remain an important tool in helping understand complex strategies as well as squad level tactics. And visually these have become a lot better than the largely forgotten "The Winning Edge."