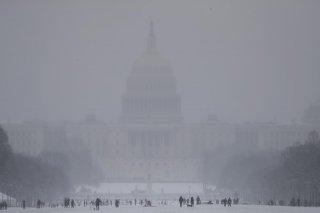 From Sunday to Monday, more than a hundred million Americans—spanning from Minnesota to Maine—were under winter weather alerts and warnings.

The massive snowstorm had already slammed California with roughly fifteen inches of rain before dumping a foot of snow on the Midwest—and was now marching toward the East Coast with even more vengeance.

Major cities like Philadelphia, New York City, and Boston were bracing for record snowfall—as much as two inches per hour—that could eventually pile up to two feet, in addition to wind gusts up to fifty miles per hour that could reduce visibility to near zero. The National Weather Service had already warned that travel in those areas would be “very difficult to impossible” and advised all to stay home.

Most meteorologists indeed are in agreement that this snowstorm has the potential to be the biggest in years—but how will it match up with other notable winter weather madness events of the past hundred-plus years? To begin, let’s take a closer look at the five worst snowstorms in U.S. history.

Known as the Great Blizzard of 1888, Great Blizzard of ’88, or the Great White Hurricane, this mammoth storm blanketed the East Coast in snow and created drifts up to fifty feet high. It literally immobilized New York, Boston, and other major cities and resulted in more than four hundred deaths, including two hundred in New York City alone. As much as a whopping fifty to sixty inches of snow were confirmed in parts of Connecticut and Massachusetts.

For two long days, the Knickerbocker Storm battered the upper south and middle Atlantic of the country, resulting in a record-breaking twenty-eight inches of snowfall on Washington, DC. In giving the snowstorm its name, the Knickerbocker Theatre’s roof gave way due to the weight of wet snow, killing nearly one hundred moviegoers.

Often called the Storm of the Century, this massive snowstorm caused three hundred deaths and between $6 billion and $10 billion in damages. It affected more than half of all U.S. states and much of eastern Canada, reaching as far south as Jacksonville, Florida. On the eastern shore of Long Island, more than fifteen homes were swept out to sea.

Over three days of unrelenting heavy, wet snow, the Blizzard of 1996 paralyzed much of the East Coast. By the time the storm subsided, it had dropped between seventeen and thirty inches of wind-driven snow. The official death toll surpassed a hundred fifty people, many of whom were killed in car accidents, and the snowstorm’s ensuing floods claimed about thirty more lives.

This relatively recent snowstorm devastated much of the East Coast, leaving thousands of holiday travelers across the country stranded in airports as airlines grounded thousands of flights. The blizzard featured a rare meteorological event known as thundersnow, in which thunder and lightning are accompanied by heavy snow rather than rain. The biggest registered snowfall was found to be in Rahway, New Jersey, which received nearly three feet.