Without U.S. Aid, Where Would Egypt Turn? 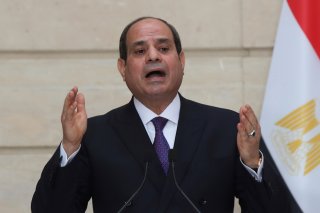 As a candidate, Joe Biden issued a stern warning to Egyptian President Abdel Fattah el-Sisi, pledging “no more blank checks for Trump’s favorite dictator.” Biden and his team have signaled they would limit or in some cases halt support for countries based on their human rights records, including Egypt and Saudi Arabia.

Biden’s team has threatened to condition the $1.5 annual bilateral aid the United States has provided Egypt since 1946. Following the Egypt-Israel peace treaty, which was signed subsequent to the Camp David Accords in 1979, U.S. military and economic assistance to Cairo has increased significantly. Every U.S. administration has justified the continuation of aid to Cairo as necessary for sustaining regional stability, safeguarding U.S. interests, and prolonging cooperation with the Egyptian military.

Limiting U.S. aid to Cairo would jeopardize the long-standing U.S.-Egyptian relationship for years to come. At the same time, denunciations over El-Sisi’s human rights record are legitimate. During his presidency, El-Sisi has unjustly imprisoned human rights defenders, journalists and activists in Egypt, reversing freedoms achieved in the 2011 Arab Spring uprising. However, terminating dialogue with Cairo would be harmful to regional security, as Egypt would lean on other human rights abusers for support instead.

El-Sisi took this threat seriously and in recent months began veering Egypt away from the U.S. and towards Western adversaries—including China. On August 5, Egypt agreed to let China establish a Mediterranean container terminal in Abu Qir, extending China’s reach and ability to bolster its One Belt One Road initiative in the Middle East. El-Sisi’s outreach to China poses severe implications for U.S. policy as it demonstrates Egypt’s willingness to work with Western adversaries to ensure its economic and military security.

Biden’s Middle East team must also consider the importance of sustained Israeli-Egyptian cooperation while it contemplates potential Egypt policy agendas. Four decades of peace between Israel and Egypt have been a highly important asset to the region. Since both countries signed the 1979 peace accord, Egypt has played an essential role in safeguarding Israel’s security on its western border with Gaza, which has been controlled by Hamas since 2007. Cairo and Tel Aviv’s shared disdain for the de facto governing authority in Gaza has contributed to their common ground. Egyptian and Israeli forces have worked together to counter the Sinai insurgency, an ongoing ISIS affiliated uprising on the peninsula. If the United States terminates supporting Egypt’s collaborative counter-terror efforts through military technology transfers and monetary aid, the Cairo-Tel Aviv relationship will be tested.

In addition to the Israel-Egypt relationship, cooperation between the United States and Egypt significantly cuts across multiple spheres, including security, counterterrorism, and intelligence. Both the Obama and Trump administrations defended continual aid to Egypt as crucial for regional stability. In 2013 the Obama administration partially halted its supply of military equipment to Egypt following the coup d’état that brought President Abdel Fattah El-Sisi to power. However, these limitations were lifted two years later in the “name of U.S. national security,” according to Obama administration officials. The equipment freeze was reversed since Egypt’s counter-terrorism efforts and anti-ISIS operations in the Sinai region and Libya were prioritized.

French President Emmanuel Macron recently faced pressure to limit and condition the sale of weapons to Egypt on the basis of human rights violations. However, Macron chose a different course than what Biden reportedly is planning. During a joint news conference in Paris with Egyptian President El-Sisi on December 7, Macron announced France would not abide by this strategy as it would be a detriment to Cairo’s ability to counter terrorism in the region. Macron stated he “would not condition matters of defense and economic cooperation on these disagreements (over human rights)…it is more effective to have a policy of demanding dialogue than a boycott which would only reduce the effectiveness of one our partners in the fight against terrorism.”

Terminating dialogue with Egypt will not lead to the cessation of human rights violations. In order to sustain its counter-terror capabilities and economic security, El-Sisi will unquestionably look to other authoritarian human rights abusers, including China and Russia, as replacements for support. The United States often has to make difficult national security decisions to cooperate with states with poor human rights records. Instead of boycotting Cairo and ultimately pushing them toward unsavory new partnerships, the U.S. could take up a two-track approach to Egypt, prioritizing the advancement of security issues while simultaneously pushing for improvements in human rights.