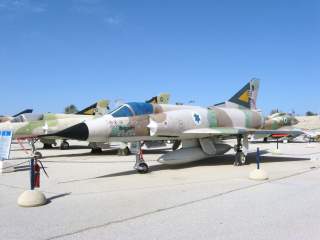 `There was no warning at all. The aircraft at el-Arish were completely wiped out. In the evening of that day pilots and ground crews were sent back to Cairo.’

Practically everything there is to say about the Israeli assault against four Arab air forces on Jun. 5, 1967, the “Operation Moked” (“Focus”), is meanwhile well known. This strike ranks amongst the most successful and celebrated military operations of all times. In simple terms: the “pre-emptive” Israeli attack against Egyptian airfields in Sinai, on the Suez Canal and elsewhere on that fateful morning, destroyed the fighting power of the UARAF (United Arab Republic Air Force, designation of Egyptian and Syrian air forces between 1958 and 1962, and of the Egyptian Air Force until 1969). By keeping successive attack waves over major enemy airfields for most of the day, the IDF/AF also broke Egyptian resistance.

As told by Tom Cooper and and David Nicolle in their book Arab MiGs, Volume 1, early on the morning of Jun. 5, 1967, several MiG-15s and MiG-17s were airborne over Egypt. A pair of No.18 Squadron’s MiG-17s flew a CAP along the border with Israel at dawn. Around 08:00 hrs at least two MiG-15s took off for a training mission from one of the airfields along the Suez Canal not blocked by morning fog.

Around 08:45 hrs local time, el-Arish AB came under rocket and cannon-fire from Israeli fighter-bombers. The blow delivered by Ouragans was so unexpected, that most of No.18 Squadron’s MiG-17s were destroyed before their crews ever recognized what is going on. Egyptian Air Force (EAF) MiG pilot Fikry el-Gahramy could only conclude:

`There was no warning at all. The aircraft at el-Arish were completely wiped out. In the evening of that day pilots and ground crews were sent back to Cairo.’

Somewhat inaccurately, another EAF MiG pilot, Tahsin Zaki later complained: `It is important to point out that in June 1967, the Israelis attacked el-Arish air-field ten minutes before the rest of our air bases, and that the whole battle could have been different if the commander at el-Arish had contacted Meliz AB via the hotline.’

In fact, el-Arish was not attacked earlier than other UARAF airfields. At precisely the same time a formation of Mirage IIICJs attacked Bir Thamada. However, FM Fawzy (Maj-Gen, Egyptian Army Chief of Staff for Operations) later provided a possible reason for Israeli ability to neutralize No.18 Squadron and el-Arish AB so swiftly. According to him, the CO el-Arish AB was working for the Israelis for most of the 1960s and revealed them all the details of his orders.

Simultaneously with el-Arish and Bir Thamada, Kabrit, which was the main hub of UARAF MiG-15 and MiG-17 operations, was nevertheless not considered a “major target” by the IDF/AF. However, it came under a heavy attack by SMB.2s from No.105 Squadron led by Yakov Nevo. This caused enough damage for EAF MiG pilot Mustafa Hafez to find himself frenetically searching for an operational aircraft to take off and fight back:

`I was not actually due to fly that morning. Around 08:20 hrs I was in the mess, since I was due to fly later that day. No particular aircraft had been allocated to me, since this was normal in our air force. We flew what was available. Suddenly I heard explosions and went outside the mess, and asked people what was going on. Someone said that it must be practise somewhere. That was when I saw an Israeli aircraft attacking, very low from south to north, coming in towards the runway. It was a Super Mystére.

‘My first instinct was to run towards a ditch, but as soon as I got there I said to myself, “what am I doing here like an idiot?” So I ran to the squadron bus so I could get to the squadron headquarters. There I found the regimental CO. He had previously been my squadron leader at Abu Suweir. His name was Mamdouh Taliba, an excellent man. He was actually heading for his car so I went up to the passenger door. The CO drove to the nearest available aircraft, and I helped strap him in, though we weren’t absolutely sure that this aircraft was ready to go. Just as he was about to close the hood I noticed that the safety pin of the ejector seat was still in, so I pulled it out. I think he took off on a sub-runway as the main runway had already been hit.’

Wing Commander Mamdouh Taliba and another pilot from No.31 Squadron scrambled undisturbed by SMB.2s because the Israelis were busy engaging two I1-14s – the planes carrying FM Amer (Egyptian Minister of War) and his entourage – that now flew right in the middle of their attack. Both transports were claimed as shot down, before the Israeli formation was intercepted by two MiG-21s and suffered a loss of two of its own aircraft. Actually, the I1-14 carrying Egyptian Minister Hussein el-Shafie and the Iraqi Defence Minister landed safely at Fayid before the place was hit for the first time (and their 11-14 destroyed on the ground). But, the plane carrying Amer had to abort the landing after Fayid AB came under attack as well. Turning around, it arrived over Inchas. Seeing this base in flames, Amer ordered the pilot to continue for Cairo West. All the time, additional Israeli fighters were flashing by. The Supreme Commander of Egyptian military found himself cut off from his Headquarters in the most crucial moments of the war.

Mustafa Hafez used the short break following this first attack to continue his search for a serviceable aircraft:

‘Then I tried to find another aircraft. They were all either damaged or being serviced, or were not ready to go. Then I went to hangar….’

When Bir Thamada came under a second attack, around 08:50 hrs, No.25 Squadron’s pilots scrambled to get airborne. Several took off as Ouragans ravaged the base, claiming the destruction of six MiGs. The last pair of UARAF fighters trying to roll for take off was not as lucky: both MiG-17s exploded after receiving multiple hits from Israeli cannon fire. Nothing similar happened at el-Sur: all of No.24 Squadron’s MiG-15bis still parked there were destroyed on the ground, along with one or two MiG-17s from No.18 Squadron.

Although hit by Israeli Ouragans around 08:55 hrs, and despite not being a regular MiG-17-base in June 1967, Meliz AB also managed to scramble several MiG-17s. Instead of engaging inferior opponents, however, their pilots were ordered to fly towards the West. With this, the Air Group 2’s and 12’s forces consisting of the MiG-15s and MiG-17s deployed in Sinai, effectively ceased to exist.

The situation on the airfields in the Canal Zone was worsening. Kabrit came under a second attack by No.105 Squadron’s SMB.2s around 08:55 hrs. Over the base, the two MiG-17s led by Wg Cdr Mamdouh Taliba sighted the Israelis while still climbing. Engaging their afterburners, the Egyptians attempted to evade, but the Number 2 of the Israeli formation first reported hits at one MiG-17’s engine and left wing, and then claimed it as shot down in a second attack. The leader of the Israeli formation confirmed that this MiG crashed, but available Egyptian sources deny any such loss. With Israeli fighters again busy disobeying their orders and engaging in air combats, Mustafa Hafez’s search for an operational aircraft finally bore fruit:

‘By this time mechanics started coming back after running away as the first bombs fell. That was when I took off in an available MiG-17F. I didn’t even check if it was armed, but only asked if it had been refuelled. I took off on a sub-runway. By that time, Mamdouh Taliba landed. I didn’t have any plans, only to try and defend the airfield. Once I was up in the air I could see the smoke from other airfields which had been attacked. I hadn’t even cleared my take off with the control tower, I just took off. Nor did I have any idea what the rest of the squadron were doing. Then I saw something flying very low. It was a Mirage going west to east, so I half rolled in behind it. It was probably doing a reconnaissance as it was on its own and was not attacking targets on the ground. As I followed it I tried to load [cock] my guns three times, but my MiG- 17 was too slow to keep up and after a while the Mirage just flew off. Of course I was angry and frustrated because I was unable to shoot down that Mirage. There was a switch in the cockpit that changed the armament from rockets to guns. And I wasn’t the only pilot to make the same mistake. Hisham Said Abdu, who was another instructor, did the same thing.

‘Almost immediately after that I saw something else very low with a long exhaust of smoke. It crashed into the Suez Canal. I thought it might have been one of my colleagues but in fact it was probably a SAM. Then, I landed safely. Another of our pilots tried to take off using the main runway but hit some bomb damage which damaged his aircraft so that he had to eject while still on the ground. He survived but he was very lucky because the minimum height for ejecting was supposed to be 250 metres. His name was Muhammad al-Hadidi. This happened after I had landed.’