WKD: Turkey Will Keep Pushing into Syria Despite the Risks 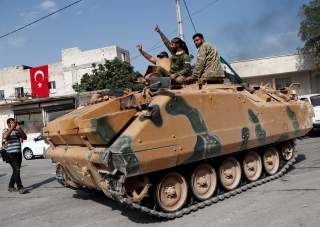 Key point: Ankara wants to achieve all of its objectives despite the risks.

The Turkish military is moving into Syria's northeast as Ankara chases its strategy of expanding a buffer space between Turkey and Syria's civil war. But while Turkey will succeed in building up this buffer zone from Afrin in the west to Iraq in the east, it will also pay a price. Turkey's actions will increase tensions not only between it and Syria and Syria's Russian and Iranian backers, but also between it and the United States, the region's former protector, and Europe. Meanwhile, an insurgency by the Kurdish-led Syrian Democratic Forces (SDF) will complicate Ankara's bid to establish a truly safe zone for Syrian refugees and Turkish security interests.

Turkey is moving ever closer to its goal of establishing a broad buffer zone in Syria. It wants to prevent the Syrian border from becoming like its border with Iraq, where an autonomous Kurdish region hosts Kurdish militants in the form of the Kurdistan Workers' Party (PKK). Ankara also wants to build up space to slow refugees fleeing the Syrian civil war from entering Turkey or even to return some of the 3.6 million refugees it has been sheltering at great expense.

Finally, by establishing a zone of influence along the border, Turkey aims to maintain a degree of influence in neighboring Syria and thus the Arab world — and a means to create some counterbalance against the sometimes unfriendly Russian and Iranian influence inside Syria.

Why a Buffer Zone Is Tricky

Building this buffer zone, however, comes with costs, from rising tensions with Syria, Russia and Iran to problems with the United States and Europe, to an ongoing Kurdish insurgency. And the more Turkey expands the buffer, the more of these costs it will incur.

A bigger buffer will increase tensions between Turkey and Syria and, by extension, between Turkey and Russia and Turkey and Iran. The Turkish incursion is coming about because the United States is signaling it is no longer protecting the SDF, creating a power vacuum for Turkey to exploit. But the SDF will not just step aside as Turkey rolls in. It has already signaled it will reach out to Damascus for protection to offset the U.S. withdrawal. A partnership with Damascus will likely erode the SDF's goal of autonomy, but the SDF, without the United States, will have little choice.

By bringing in Damascus, the SDF will create a new front between Syria and Turkey — and, again by extension, with Russia and Iran, which Syria will rely on to help it take control of the northeast. A larger buffer zone in the northeast will require Turkish proxies and forces to extend their reach to maintain it, creating opportunities for mistakes and friction between Syria and its allies on one side and Turkey on the other. The recurrent de-escalation talks between Ankara, Moscow and Tehran will also increasingly have to factor in the northeast.

Even as the big powers seek to de-escalate the conflict, the SDF will build on the anti-Turkish insurgency already present in Afrin and extend it to whatever new buffer zones are built up in northeastern Syria. Once more, the larger the zone, the more targets there will be for the insurgency. This insurgency will also reflect the geographic reality of the region: With such a vast area to patrol, Turkey will not be able to wholly control the border, and thus will not completely cut off the SDF-PKK links it is seeking to sever. Smuggling of arms and supplies back and forth will continue on some scale. In addition to the increased risks from the SDF, the Islamic State's underground elements will also potentially strike Turkish proxies and forces as they stay in Syria. This situation will create a long-term drain on Turkish military and security resources while failing to fully address its security concerns.

A Place to Resettle Syrian Refugees

Turkey also will not be able to use the expanded buffer zone to solve all of its refugee-related problems. Many refugees are from Syria's west — which is under regime control — and will resist resettlement in the northeast; they will not want to move to an unfamiliar part of the country. The northeast also lacks housing and employment opportunities. Even in pre-civil war Syria, the Syria-Turkish border region was relatively underdeveloped, and its cities small. Housing will be hard to find, and many refugees will realize they will be placed in long-term camps, dependent on aid.

That does not mean Turkey will not force some refugees to go to the safe zones. With anti-Arab sentiment rising in cash-strapped Turkey, the Turkish government needs to show it is not prioritizing foreign refugees over its own citizens. But the harsher Turkey acts toward Syrian refugees, the more Ankara risks outrage from Europe and the United States, with disruptions in their relationships possible. In addition, to find suitable housing for refugees and to disrupt the connections between Turkish Kurdistan and Syrian Kurdistan, Turkey will be tempted to repeat its Afrin population strategy, ejecting people it considers disloyal and replacing them with other Syrian refugees. In doing so, Turkey once more would risk international outrage from its Western partners and create a new incentive for sanctions against it.

Finally, the more Turkey expands its buffer zones, the more it will risk its ties with the United States, particularly with the U.S. Congress, whose members are already outraged by Turkish military action against the SDF, a U.S. ally in the fight against the Islamic State. A larger or lengthier Turkish military operation will increase Congress' desire to penalize Turkey. Further humanitarian-related concerns may arise as Turkey resettles refugees and carries out military operations. Congress could introduce fresh legislation in response to such incidents, producing more tension between the United States and Turkey.

But because of its imperative to diminish Kurdish militancy that could lead to a Kurdish state, Ankara will have a high tolerance for some of these risks as it seeks to gain as much as it can from its current military operations. While it will not want to escalate the situation to a military confrontation with Syria, Russia or Iran, Turkey will brave sanctions from the United States and Europe to achieve its buffer zone — before Syria and its allies move into parts of the northeast.

In Syria, Turkey Will Pay the Price for an Imperfect Buffer is republished with the permission of Stratfor Worldview, a geopolitical intelligence and advisory firm.