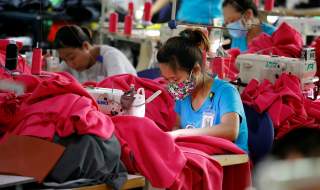 The other week the Bureau of Labor Statistics (BLS) released their monthly jobs report. Buried beneath the low unemployment rate and showing of a robust economy was another figure that some have pointed to as proof of the gains women have made in the workplace. As of December 2019, women held 76.2 million jobs, constituting 50.04 percent of the total nonfarm payrolls. This is the first time in a decade we have seen more women than men on the payrolls, and this workplace parity is indeed a noteworthy labor force gain. A Wall Street Journal article hailed it as women “overtaking men as a majority in the workforce.” However, while this is indeed true, the picture is more complex. Unfortunately, we are quite simply not there yet.

As others have noted, women are making up a larger portion of sectors that are expanding at above average rates. This is good news, because it means that the growing share of women on the payrolls is not a fleeting phenomenon, but a trend with sufficient economic momentum to grow and potentially expand. For instance, as per data from the BLS, eight of the twenty fastest growing industries (in terms of output) are in the health care and social assistance sector. This includes jobs such in hospitals, outpatient care centers, medical labs, and family home health services, all of which are projected to grow between 2.7 to 3.5 percent each year over the next decade. The information and education sectors are also among the fastest growing. Furthermore, these industries are projected to experience the largest wage growth as well. Importantly, women are dominating these growing service sectors. In December 2019, women made up 77.4 percent of all education and health service employees. The most rapidly declining industries are in the manufacturing sector, with wages expected to shrink up to 4.6 percent each year. In this sector, women are only 28.6 percent of the workforce.

While it is extremely encouraging to see women in these expanding sectors, it is important to note that even within these industries, many jobs and positions are poorly paid. In 2018, the median annual pay of home health aides and personal care aides was $24,060, and the typical entry-level education is a high school diploma or equivalent. Across the entirety of the home health care and social assistance sector, a quick calculation based upon average hourly earnings and weekly hoursreveals a yearly salary of $48,700. Below, we show the average hourly earnings of all main sector classifications of the BLS, from lowest to highest paying, against the percent of female employees. Notice the negative correlation; higher paying sectors tend to have a smaller percentage of female employees. The highest paying sectors are information and utilities, with 40.0 and 24.3 percent of female employees, respectively. The lowest paying sector is leisure and hospitality, in which 53.2 percent of employees are female.

Another interesting dimension to analyze is part time work. Even when women are in the workforce, they are much more likely to opt for part-time work, as shown in the chart below. The share of voluntary part-time work remains at a stable level since the mid-1990s, but has persistently been more than twice as common among women, across age, race, and ethnicity.

In December 2019, women made up over 63 percent of all part-time workers over the age of 20. In 2018, 52.8 percent of workers who were part-time for economic reasons were female. Compare this to the fact that 65.6 percent of workers who were part time for non-economic reasons were female. The choice of part-time work is often driven by family considerations. In 2016, data showthat 34.3 percent of voluntary part-time female workers reported doing so due to either “childcare problems” or “other family and/or personal obligations”, compared to only 7.5 percent of men. Hence, traditional gender roles seem to persist. Women are still more likely to engage in unpaid work and bear a larger burden of housework and childcare. In addition, research indicates that women experience employment interruptions and reductions in work hours far more than men do, which then impacts career outcomes.

Our goal as a society is not to dictate how households balance work and family. Simply that every worker should be able to make the best choices to maximize opportunity for themselves and their families. While the gains made thus far are impressive, a lot more can be achieved through policy. In particular, policies like paid family leave and affordable childcare can enable women to truly have a choice when it comes to balancing work and caregiving needs at home. Vocational training and paid apprenticeships can help women (and men) advance their skills and remain attached to the workforce. Finally, supportive policies that enable women to close educational gaps in STEM fields can go a long way towards opening opportunities as well. Since the 1990s women have earned more than half of all bachelor degrees, and while the share of women in STEM has been growing, in 2015, women received only 18 percent of degrees in computer science, 20 percent in engineering and 39 percent in the physical sciences. The numbers are worse for minority women. This translates to the workforce, with women constituting only 28 percent of the science and engineering workforce. While there is no magic number for what percent of women “should” be in these fields, ensuring that women have the opportunity to pursue education and employment in these industries, and removing barriers that might stand in their way, is key. The Obama administration’s White House Council on Women and Girls and laws signed under the current administration focus on the goal of improving access to these fields for women and encouraging their employment in these relatively more skilled and higher paying industries.

As with all data, focusing on one indicator of progress is not enough. The landscape of success involves looking at a multitude of statistics and metrics. Women are starting to make a dent and create a space for themselves in that landscape, but let’s not celebrate too soon. Steady, continued progress will only come with concerted efforts — from policymakers, businesses and changing dynamics within the family.