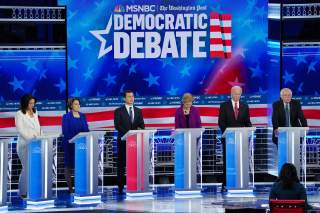 So in the Atlanta debate on Nov. 20 – featuring an all-women moderator panel and four female candidates – I was heartened to see that some of these topics got a bit more attention.

As an economist who studies inequality and household economics, I believe issues like these, which so fundamentally affect family outcomes, should be at the heart of our national conversation.

Here’s a glimpse at how the candidates’ discussion of economic policy engaged with gender, both directly and indirectly, during the debate.

Few candidates have highlighted their policies on gender equity unprompted by moderators in the debates so far, and this debate was no exception.

Moderator Ashley Parker asked about parental leave and public child care, directing her first question on the topic to one of the five men on the stage, entrepreneur Andrew Yang.

Yang, who noted that the U.S. is one of only two countries without paid family leave, briefly signaled his support for such a policy by alluding to his own family.

A more detailed discussion then emerged between Sen. Amy Klobuchar of Minnesota and Sen. Kamala Harris of California. Klobuchar said she favored a more restrained three-month paid parental leave policy compared with Harris’ six months. Even at six months, this would be significantly less than what is common in many other countries.

Some of the candidates noted how their broader progressive policies would indirectly support women and children.

For example, in defending her wealth tax, Massachusetts Sen. Elizabeth Warren emphasized that the tax revenue would pay for many policies she supports, including universal childcare and pre-K, while promoting higher pay for the women of color who are disproportionately represented among childcare workers.

Similarly, Yang, in his response on paid family leave, pivoted to his “freedom dividend” basic income proposal as a way to support families, including those with parents who stay home with their kids.

And late in the debate, former Vice President Joe Biden spoke briefly on his role in sponsoring the Violence Against Women Act.

There are some reasons these issues aren’t so popular on the campaign trail.

The only candidate who vigorously promoted parental leave and universal pre-K policies was Sen. Kirsten Gillibrand, but she dropped out after failing to garner strong support. This outcome perhaps explains why the remaining candidates have focused so sparingly on what are sometimes derided as “women’s issues.”

For women candidates, that’s compounded by concerns that excessive focus on such issues may feed into stereotypes that women are weak on fiscal issues, threatening their already lower perceived “electability.”

While candidates may remain wary of making “women’s issues” central to their platforms, gender is likely to continue shaping economic policy in the presidential race.

Klobuchar alluded to the gendered concerns about electability when asked whether women were held to a higher standard.

“If you think a woman can’t beat Donald Trump, Nancy Pelosi does it every day,” she said.