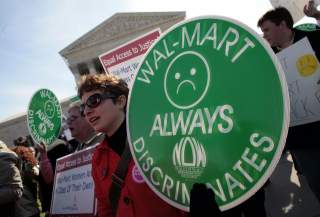 Several cases addressing whether it’s legal to fire a worker because of their sexual orientation and gender identity were taken up by the Supreme Court this week.

While these legal questions deserve significant attention, those concerned about equality on the job should not lose sight of the broader, yet equally important issue – the continued prevalence of sex discrimination in the workplace as a whole.

And while workplace sexual harassment has taken center stage in the past couple of years, women are still facing these other longstanding problems of discrimination.

Even if workers successfully convince the Supreme Court that sexual orientation should be protected by federal law, my work shows that their fellow employees will still be faced with the daunting task of trying to litigate such claims.

In the vast majority of cases, these claims of discrimination don’t even make it to a court.

Only about 6% of civil rights lawsuits in the U.S. find their way to trial, according to a recent study that examined about 1,800 lawsuits filed in federal courts between 1988 and 2003.

The study, discussed in a 2017 article published in the American Bar Journal, included not just cases of sex discrimination, but also those filed alleging discrimination based on race, age and disability.

Of those that actually did go to trial, only about a third of the plaintiffs won their cases, the researchers found.

That’s at least in part because rulings by the U.S. Supreme Court over the past decade have made it harder to file complaints, and have restricted the ability of multiple plaintiffs to bring claims and share costs through a class action lawsuit.

In the most widely publicized example, in 2011 the Supreme Court overturned a lower court’s decision against Walmart and prohibited more than a million women from making the case that the company engaged in unfair pay and promotion practices.

In the 5-4 decision, the majority said that the women did not have sufficient “commonality” under the law to proceed as a class, arguing that the alleged victims “have little in common but their sex and this lawsuit.”

Justice Ruth Bader Ginsburg criticized that approach in her dissent, writing that “the ‘dissimilarities’ approach” of the majority led it “to train its attention on what distinguishes individual class members, rather than on what unites them.”

While the courts have been slow to recognize and punish sex discrimination, my research has shown that illegal workplace bias against women is pervasive.

Here are three areas where it is a problem, though this list is not exhaustive.

Women make less money than men, as the U.S. women’s soccer team dramatically highlighted. In their lawsuit, they estimate that they are paid about 38% of what male players earn.

Pay gaps between men and women have existed for a long time.

In 1960, surveys conducted by the U.S. Department of Labor showed that women working full-time made 60.8% of the median pay that men did.

A male bank teller, for example, “received US$5.50 to $31 per week more than their female counterparts,” while a male machine tool operator “averaged $2.05 per hour compared with $1.71 for women,” according to a 1974 issue of the Boston College Industrial and Commercial Law Review, which examined the previous decade’s enforcement of the Equal Pay Act of 1963.

Today, women make 80 cents for every dollar a man is paid, according to the most recent data released by the U.S. Census Bureau.

By making access to justice much harder for victims of workplace discrimination, the federal courts have created an additional barrier for women seeking equal pay. And my research has outlined the ongoing nature of this pay discrimination.

Even getting a job that is likely to pay them less is harder for women.

For example, as a study published in the Psychology of Women Quarterly showed, men tend to be perceived more favorably by employers — even when men and women who are trained actors respond to interview questions in the same way.

In perhaps the most famous study in this area, performed by researchers Claudia Goldin and Cecilia Rouse, an orchestra used screens to hide the gender of those auditioning for a position. Women were 50% more likely to advance in the process than they had been when evaluators could see their gender.

Other research has shown that women struggle to get jobs that require high levels of math skills. In those experiments, researchers from the University of Chicago, Columbia University and Northwestern University found that “male and female employers were twice as likely to hire a man than a woman when the only factor they observed was physical appearance.”

These stereotypes persist even in academic settings.

A study by Columbia University researchers concluded that “prospective doctoral student emails with minority- or female-sounding names received fewer responses from faculty than those with male-sounding names.”

Given the subjective nature of the hiring process, these claims are difficult to prove.

In my research, I trace how this kind of discrimination persists, and how the subjective nature of the hiring process has caused some of these problems.

Women also struggle to get promoted after they’re hired.

Even when just as qualified as men, women are 28% less likely to be hired for the job of a corporate CEO.

Childbirth may be a factor in the lack of advancement.

In one study performed by the Institute for Fiscal Studies, researchers found that “Twelve years after giving birth for the first time, women are [still] making 33% less per hour than men.”

Pinning down the exact reason for this is difficult. It may be related to the disproportionate amount of time women spend raising a child compared to men, as well as the unfounded negative perceptions some employers may have of working mothers.

Yet establishing discrimination claims in the context of the glass ceiling is as difficult as doing so in the hiring process, as these effects often occur over the course of a long period of time.

And as employment discrimination claims are now even more difficult to litigate, finding sufficient evidence to bring these cases is harder.

One Prominent – But Not Unusual – Case

As the U.S. women’s national soccer team competed in the final World Cup match against the Netherlands this summer, the crowd cheered, “Equal pay! Equal pay!” in the stadium.

This overwhelming support for the players was in response to a lawsuit more than two dozen members of the team filed in March, arguing that they are unfairly paid less than the men’s team.

In challenging the pay practices of the U.S. Soccer Federation, the women became the latest example of just how pervasive sex discrimination is in the workplace. These teammates were able to draw attention to their cause.

But many other cases of sex discrimination in the workplace languish or are prevented from getting their day in court.