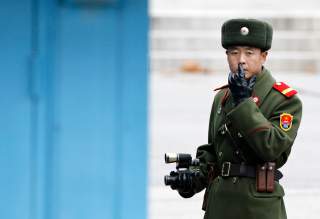 The farthest-stretching mine belt on Earth isn’t in the Korean Demilitarized Zone, the Angolan savannas or the Afghan mountains. It’s in one of the most desolate parts of the Sahara Desert.

The U.N. classifies the Western Sahara as a “non-self-governing territory,” despite two-thirds of the region being occupied by Morocco.

Located on the west coast of Africa—near the Canary Islands, south of Morocco, west of Algeria and north of Mauritania—Western Sahara was Spanish until 1976, when pressure from pro-independence fighters compelled Spain’s forces to withdraw.

(This article by Mitch Swenson originally appeared at War is Boring in 2014.)

Following the 1975 Moroccan invasion, the Sahrawi indigenous people fled by the thousands across the border into Algeria. And in 1980 Morocco—sensing that the territory was vulnerable—made a push to annex the majority of the ungoverned desert.

Moroccan engineers built the Berm—a 1,500-mile tract of land mines and elevated barricades that cuts through the Western Sahara.

The Berm is one of the most secure defensive barriers ever. It consists of 10-foot-high walls, barbed wire, electric fences and, every seven miles, human sentries. On top of that, the fortification lies amid the world’s longest continuous minefield.

In sections, year by year, Morocco expanded the walls of the Berm until 1987, when it reached the southern tip of the border with Mauritania. Upon completion, the wall encased all the major settlements of the Western Sahara including its largest city El Aaiún, which is under Morocco’s control.

Among locals of the region the Berm is also known as Hassan’s wall—named for King Hassan II, who annexed most of what was then called Spanish Sahara.

Today there are still 120,000 Moroccan troops along the border of the Southern Provinces—the areas Morocco claims. East of the Berm is the free zone, a landlocked swath of desert next to Algeria and Mauritania.

Within this area, the Sahrawi rebel liberation movement Polisario Front loosely governs, albeit without international recognition.

The free zone formed in 1991 as a part of a cease-fire and settlement plan between Morocco and the Polisario. The plan allowed for the Sahrawi people to eventually establish an independent state. But talks concerning a referendum for the territory east of the Berm have stalled.

The primary crossing point in and out of the Berm is near the Algerian town of Tindouf, which is also home to the U.N. Mission for the Referendum in Western Sahara, or MINURSO.

Tindouf is an “immensely complicated place,” according to Foreign Policy. Al Qaeda in the Islamic Maghreb has created “an arc of instability that poses an immediate threat.” In this sandstorm city, relations are tenuous between peacekeeping forces, Polisario Front soldiers and inhabitants of the six nearby refugee camps.

And in 2011, militants from MUJAO—an affiliate of Al Qaeda in the Islamic Maghreb—kidnapped three foreign aid workers. Ever since then, the U.N. Security Council has closely scrutinized Polisario’s management of the free-zone camps.

Regional experts and Western media, including The Washington Post, have speculated that Al Qaeda operatives have already infiltrated the Western Sahara territory in order to recruit Sahrawi youth to fight in Mali, Syria and elsewhere.

While the Berm may keep many Al Qaeda recruiters out of Morocco’s Southern Provinces, it doesn’t protect the free zone from Islamic radicalization.

Frustration has been growing among refugees in Polisario areas of the Western Sahara. A Sahrawi opposition to the Polisario calling itself the Movement of Youth for Change, or MJPC, is gaining traction. Last month several Polisario soldiers defected to the MJPC. The young group claims it wants to “remove the corrupt leadership of the Polisario Front” … and to eventually establish a state.

The group also wants jobs for the Sahrawi. It points out that many inhabitants east of the Berm feel the Polisario military is their only employment prospect.

Some American think-tanks seem to suggest that it would be convenient for the Polisario Front to ally with Al Qaeda. This would help the Polisario to benefit from smuggling routes and to strengthen its territorial grip on the free zone.

It’s no secret that weapons trafficking is rife in the Sahel—especially in the Tuareg intersection of Algeria, Mali, Mauritania and Niger. The Polisario could, in theory, help Al Qaeda traffickers to get through the Berm.

According to a security briefing by Jane’s, the Polisario has on several occasions been able to breach Moroccan defenses by burrowing under or clearing sections of the vast fortification.

While it’s possible that the Polisario and Al Qaeda could exploit these passages to some meaningful effect, for now the Berm’s deadly and intimidating expanse—and the countless explosives beneath it—succeeds in keeping Morocco’s enemies at bay.