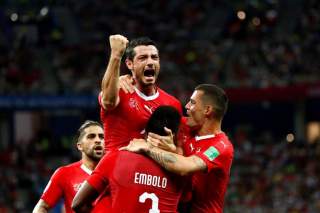 One can compare the 2018 World Cup to the 2014 Winter Olympics—the same country, under the leadership of the same president, organizes a global sports event. However, the differences are more interesting. Arguably, no other competition on the planet, including the Olympic games, attracts a broader audience than the World Cup. In 2014, Sochi, a resort town, enjoyed all the global attention; today the soccer championship takes place all over the European part of Russia, giving millions of guests a reason to travel and to see the country. Most importantly, during the last four years, international relations between Russia and the world have drastically changed. Now, with the 2018 World Cup, millions are coming to Russia and are learning first-hand about the country that the global mass media keeps talking about.

The recent lack of significant victories for the Russian national team should not deceive anybody—soccer is very popular in Russia. Hard-core Russian fans of older generations may be nostalgic for the days of Soviet soccer glory, but the Soviet Union, unlike modern Russia, could never host a domestic World Cup. The dream seemed possible when the global soccer body was choosing the host for 1990, but the Soviet bureaucracy demonstrated its typical sloppiness. On May 8, 1984, eleven days before the crucial selection vote, the Soviet Union announced that it would boycott the Summer Olympic Games in Los Angeles. This left Soviet soccer insiders scratching their heads wondering what was the rush to do so?

Meanwhile, the Soviet Union's opponents took full advantage of that blunder. For instance, the International Federation of Association Football (FIFA) declares political and state non-interference in sports matters as one of its cornerstone principles. This meant that in 1984, just before the crucial FIFA vote, the Soviet Union demonstrated that it did not follow this principle due to its boycott. Therefore, unsurprisingly, the Soviet bid for the World Cup was defeated by Italy, eleven votes against five. Fast forward thirty years and the global governing soccer body confirmed that this principle is supreme—despite many calls to remove the tournament from Russia for political reasons, FIFA seemed never to consider such move seriously. The critics can come up with many political reasons to punish Russia, however, from the standpoint of organizing a high-quality global soccer fest—FIFA's primary concern—Russia has a lot to offer as a decent host.

The country is relatively easy to reach for the majority of participants and their fans. Public money was substantially spent to upgrade stadiums and infrastructure. The overall costs can be criticized. However, the government efforts will have a long-term positive effect on the development of biggest cities, attracting more tourists and revenue. Even Moscow has become more accessible to English speakers. Western observers notice that the sizeable security services are providing for a safe World Cup. And, of course, Russia has a lot to offer for the millions following their teams around the country beside soccer.

The Kremlin will also enjoy its status as a host. One should not be confused with the reports from the opening ceremony which was attended by several of Russia's allies and skipped by leaders of rival powers. In the end, the same leaders are very much in sync with their electorate, and when the time comes for the beloved national teams to play, they may not want to miss the show. It was expected in Moscow that both President Macron and Chancellor Merkel cannot avoid personally supporting their national teams. It would also be difficult for Theresa May not to come if the English team, at long last, survives the knock-out phase and perhaps plays in the final game. Finally, Prime Minister Conte of Italy is always welcomed, but his country—the impressive four times world champion—needs more time to recover from the trauma of missing the first World Cup in sixty years.

Ultimately, it would be difficult for all those leaders to pick a side in the opening game between Russia and Saudi Arabia. The Crown Prince Mohammad bin Salman, sitting together with President Putin and FIFA President Gianni Infantino, had no such problem. Mohammad bin Salman came to Moscow not only to support the national team but also to discuss bilateral cooperation on oil markets and beyond. Moon Jae-in, the President of South Korea, came to Russia to cheer South Korean players and to discuss with President Putin important developments regarding the Korean Peninsula.

Considering all this diplomatic activity on the side of the prime global sports event, one should not be surprised by the recent speculations about the possibility of President Trump coming in for the final game. Three things are clear: President Trump likes to be in the spotlight, the Kremlin has invited him, and, according to media reports, he is pushing his team to meet with President Putin this summer.

The time will show whether such a “soccer summit” will actually take place. Whatever the politics and the sports results of the World Cup, average Russians, and visiting fans are the biggest winners. According to some estimates, two million fans are arriving in Russia, with American tourists allegedly having one of the biggest representations despite the U.S. national team not making the cut to play. The global standing of a country can improve for many reasons—for Russia these are its culture and sports. For instance, there are the great Russian writers of the past and its ballet. There are also famous athletes, as Alexander Ovechkin, a member of the “Putin Team” and the captain of victorious “Washington Capitals.”

The myriad of human interactions between Russians and visiting fans during the World Cup might prove to be more critical for improving Russia's international image than many festivals of Russian culture abroad. After the first weeks of the tournament, it is virtually impossible to find any verification of negative predictions made before the World Cup started and it may remain this way for the rest of the games. If this is the case, Russia can claim a serious international victory—whatever will be the result of its national team.

Nikolay Pakhomov is president of The New York Consulting Bureau. You can follow him on Twitter @nik_pakhomov.