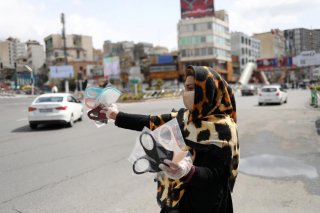 At the start of 2020 much of the world anxiously watched as open confrontation between the United States and Iran quickly escalated with the assassination of Iranian General Qassem Soleimani. World War III memes began trending as we awaited Iran’s response.

Anti-war voices were quick to note that our current hostilities, though not entirely new, reached this tipping point after President Trump’s unilateral decision to quit the Iran nuclear deal and reimpose brutal sanctions on Iran, despite Iran’s continued compliance with the landmark deal. No one anticipated at the time that the world would face a more imminent and deadly threat with the coronavirus, which forces us to either come together as an international community against a common foe, or divided, risk millions of lives.

While the danger of the virus transcends borders, again we see familiar politicking play out as the crisis unfolds. Nations continue to accuse each other of hiding information and pointing fingers to lay blame. With the first outbreak originating in China, some U.S. officials use threatening language and the President repeats the label “Chinese Virus” to vilify the Chinese state. In the midst of this pandemic, the issue of U.S.-Iran relations is also a central debate.

Iran is one of the hardest-hit nations in the world combatting the coronavirus. Iran’s capacity to fight the virus is deeply impaired by an economy already devastated by sanctions, and sanctions that continue to impede its ability to acquire needed medical supplies.

While proponents of sanctions continue to claim that humanitarian aid is exempt from sanctions, the evidence on the ground shows otherwise. In fact, just a few weeks ago the U.S. Treasury eased slightly the restrictions on the Central Bank of Iran to facilitate humanitarian transactions. This move by the Treasury is an implicit admission that the U.S. sanctions regime is hindering these purchases.

Moreover, advocates of sanctions have achieved their objective of crippling Iran’s economy, which is another factor that thwarts Iran’s ability to undertake the massive challenges posed by the pandemic.

We need look no further than U.S storefronts with empty shelves, or Americans’ panic over a coming economic meltdown, to understand that access to medicines alone does not address the numerous complications of this crisis.

Now, imagine if our concerns were not about an impending economic catastrophe, but the ruin that we currently find ourselves in. On top of that, imagine that our economy had no hope of recovery because the richest and most powerful country in the world was intent on maintaining its stranglehold of our economy as it watched our citizens literally suffocate. This is the state of Iran.

Despite growing calls from the international community and the United Nations for the United States to lift sanctions on Iran on humanitarian grounds, at least temporarily due to the pandemic, the administration has thus far refused and even taken measures to increase sanctions just last week.

At the same time last week, researchers at Iran’s Sharif University estimated that if current conditions hold, up to 3.5 million Iranians could die. All this while U.S. sanctions have already made life miserable for ordinary Iranians, under the guise of its “maximum pressure” campaign.

How do we measure the success of President Trump’s Iran policy?

Since the U.S. abrogated the nuclear deal, Iran has slowly reduced its compliance with the deal and now has more stockpiles of uranium and centrifuges spinning. Regional instability has increased, along with hostilities that brought us to the brink of an unwanted and needless war just a few months ago, though it may feel like an eternity.

The authoritarian leadership of the Islamic Republic is not on the brink of collapse, especially during a pandemic in which many Iranians are scared to even leave their homes.

By all measures, the only objectives this administration’s Iran policy has achieved is to consolidate power among hardliners, sow further distrust of the U.S. in the Iranian psyche, and disproportionately hurt innocent Iranian people.

On the American side, according to a new Tarrance Group poll, a majority of Republican voters in key swing states believe that preventing Iran from getting a nuclear weapon is critical and that the U.S. should resolve the issue through negotiations.

The coronavirus crisis presents the perfect opportunity for the U.S. to resolve its ongoing conflict with Iran. President Trump can heed the calls to lift sanctions for humanitarian purposes, forcing Iran to return to full compliance with the still extant Joint Comprehensive Plan of Action (JCPOA). This can open the door to further negotiations, provide a much-needed respite to hostilities, and save possibly millions of innocent human lives.

Whatever our enmities, or rightful grievances, the entire world is witnessing a historic moment. This virus is not confined to China or Iran, or Europe or the United States. It knows no borders, no religion, no gender, and no politics. In order to combat, it requires our mutual cooperation that transcends all these divisions.

The coronavirus pandemic is in many ways a dress rehearsal for climate change. These challenges can only be solved through global efforts and the collaboration of states. In its own right, the JCPOA is a model for compromise and working together. The path for cooperation is always open to us, and at this precarious moment, our lives are hanging in the balance.

Assal Rad is a Research Fellow at the National Iranian American Council. She received her Ph.D. in history at the University of California, Irvine. Follow her on Twitter @assalrad.

Image: A woman wears a protective face mask and gloves, amid fear of the coronavirus disease (COVID-19), as she sells the masks in Tajrish square in Tehran, Iran April 2, 2020. WANA (West Asia News Agency)/Ali Khara via REUTERS