The World Spends $3 Trillion a Year on Arms 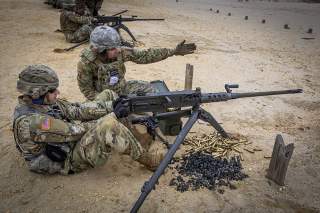 The world is spending almost $3 trillion a year on arms.

The huge gap between the high and low range of each number is because converting foreign military spending into U.S. dollars is a difficult process. The study used five different methods to make the conversion. Nonetheless, overall global military spending appears to have risen sharply since 2007.

Interestingly, while global military spending has risen, the amount of money spent per soldier has risen even more, again pointing to the trend of replacing people with drones, robots and highly automated platforms such as warships designed to require fewer sailors. “From 2007 through 2017, world military expenditures per armed forces member - an indicator of the capital-intensivity of the military - appear to have risen by 15 percent to 38 percent despite rising more slowly after 2009,” noted the study.

Curiously, there were two exceptions where spending per soldier did not rise: North America and East Africa.

The United States accounted for 79 percent of the global arms trade, or an average of $143 billion per year, followed by the European Union at 10 percent, Russia at 5 percent and China at less than 2 percent

Arms exports actually had a significant effect on America’s balance of payments. “Over the period, the arms trade surplus of the United States may have offset as much as 24 percent of its total trade deficit,” the study concluded.