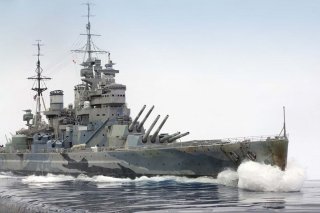 When the HMS Prince of Wales arrived in Singapore on December 2, 1941 as the flagship of Force Z, under the command of Admiral Sir Tom Phillips, it was meant to serve as a deterrent to Japanese aggression and to counter any attack on Singapore. Just eight days later the new King George V-class battleship, which had been commissioned in March of that year, was sunk along with the battlecruiser HMS Repulse.

It was the greatest single defeat suffered by the Royal Navy during the Second World War, and it so shocked the British government that it helped change procurement strategies in both the United Kingdom and the United States. Coming just days after the Japanese Imperial Navy attacked Pearl Harbor in which five battleships were sunk – two completely destroyed – this highlighted that the days of the battleship were coming to an end.

A lingering question remains, why did the British actually expect it to turn out any differently at Singapore with the HMS Prince of Wales?

Admiral of the Home Fleet Sir John Tovey had been opposed to sending any of the new King George V-class battleships to tropical regions as he believed the ships were not cable of operating in tropical climates. By sending her and Repulse it deprived the Home Fleet of two powerful warships.

Then there was the decision to deploy the two capital ships with no aircraft carrier, and the Royal Navy clearly understood that aircraft were a very serious and lethal threat to battleships.

The Fairey Swordfish, an open cockpit biplane torpedo bomber, played a key role in sinking the German battleship Bismarck in May 1941. Six months earlier the same type of aircraft – which have been described as looking like leftovers from the First World War – successfully attacked the Italian Regia Marine at anchor in the harbor of Tarant. In total 21 Swordfish, in two waves of 12 and nine aircraft, took off from HMS Illustrious, and sunk the Italian battleship Conte di Cavour, and heavily damaged the two additional battleships, Caio Duilio, which was only saved by her running aground; and Littorio, which was hit by multiple torpedoes but didn't sink.

The attack not only crippled the Italian fleet, but it inspired the Japanese as well – whose military planners studied the attack as a model for its campaign at Pearl Harbor a year later.

Clearly the Royal Navy saw the potential of aircraft and what can only be described as what antiquated torpedo planes could do to battleships. While the Royal Navy, as well as the U.S. Navy, seriously underestimated the effectiveness of Japanese aircraft, the fact remains that Prince of Wales should not have sortied to sea without air cover.

The original plan had been to have HMS Indomitable accompany Prince of Wales, but the carrier ran aground in Kingston harbor in Jamaica and was instead sent to Norfolk Navy Yard for repairs. This meant there was no carrier support for Force Z.

Then there is also the fact that Prince of Wales, which had just completed cleaning of her boilers, was not at top operational performance when Admiral Philips took Force Z to sea to attack the Japanese landing force on the Malay Peninsula. It was a terrible mistake and on December 10 the battleship was attacked by twin-engine bombers that carried torpedoes fitted with 150-kilogram warheads.

This was really just the first in a series of costly blunders that led to numerous defeats in the spring of 1942, which included the fall of Singapore and the Philippines. The U.S. Navy needed to refocus its efforts while the Royal Navy was essentially pushed back to the Indian Ocean.

During the Second World War other battleships would fall prey to aircraft – with the Japanese mostly on the receiving end. Yet, the fact remains that the Royal Navy essentially pioneered the airborne attack on the enemy's capital ships yet failed to protect its newest and most powerful warships in the process.

Peter Suciu is a Michigan-based writer who had a model of HMS Prince of Wales as a boy. He has contributed to more than four dozen magazines, newspapers and websites. He is the author of several books on military